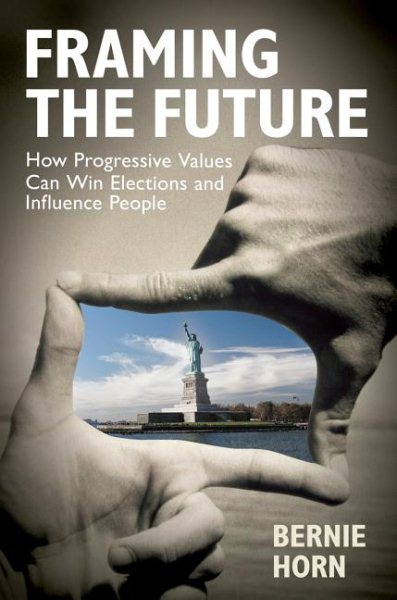 Horn offers readers an original, field-tested framework of values and shows how progressives can use it to find common ground with mainstream voters, demonstrating that their positions are more in sync with American ideals than conservative politicians views. Read More
Polls consistently show that most Americans are progressives at heart. By margins of at least two to one, they we favor affordable healthcare for all, even if it means raising taxes; want federal action to combat global warming; support stricter gun control; don’t want Roe vs. Wade overturned; and the list goes on. So why is it so hard for progressive candidates to win elections? Because, says Bernie Horn, most progressives don’t know how to explain their ideas in ways that resonate with “persuadables”—the significant slice of the electorate who don’t instantly identify as Democrats or Republicans. These are the voters who swing elections. There’s been a lot of theoretical discussion about framing lately, but Framing the Future isn’t theory—the concepts outlined have been used successfully by progressive candidates across the nation, even in such conservative bastions as Montana, Arizona, and Florida. Drawing on rigorous polling data and his own experience as a veteran political consultant, Horn explains how persuadable voters think about issues and make political decisions and why, as a result, the usual progressive approaches are practically designed to fail with them. He offers a crash course in the nuts and bolts of framing and shows how to use three bedrock American values—freedom, opportunity, and security—to frame progressive positions in a way that creates a consistent, unified political vision that will appeal to persuadable voters. He even offers advice on specific words and phrases to use when talking about a variety of issues and ideas. Read Less

Goodreads reviews for Framing the Future: How Progressive Values Can Win Elections and Influence People

If You Lived Here, I'd Know Your Name: News from Small-Town...

The Dance of Anger: A Woman's Guide to Changing the Patterns...

The Message//REMIX (Hardcover, Wood): The Bible in Contempor...