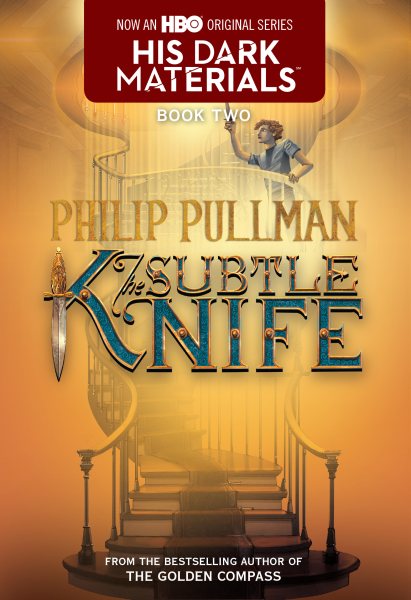 As the boundaries between worlds begin to dissolve, Lyra and her daemon help Will Parry in his search for his father and for a powerful, magical knife. Read More
The questions, discussion topics, and author information that follow are intended to enhance your group's reading of The Subtle Knife . The Subtle Knife is Book Two of Philip Pullman's trilogy 'His Dark Materials'. In Book One, The Golden Compass, young Lyra Belacqua journeys through 'a universe like ours but different in many ways.' The most striking difference between Lyra's world and ours is the existence of daemons. These spirit-creatures, physical manifestations of the human soul, can change shape until their human companions reach adolescence. Then each daemon settles into the animal form that best reflects the inner nature of its human counterpart. In The Golden Compass, Lyra discovers that her mother, Mrs. Coulter, is conducting experiments in which children are severed from their daemons, turning them into emotionless, almost inhuman beings. Mrs. Coulter and her colleagues are doing this to learn more about a substance called 'Dust, ' which seems to accumulate on humans when they reach maturity. While many fear Dust, both Mrs. Coulter and Lyra's father, Lord Asriel, see it as the source of great power. The Golden Compass concludes with Lord Asriel harnessing the power of Dust to create an opening in the atmosphere of his world, forging a bridge to another universe. This he fearlessly crosses, leaving Mrs. Coulter behind. Lyra perceives that Dust is good and vows to discover its secrets with the help of her 'golden compass', or alethiometer, a truth-seeking device. And so Lyra and her daemon, Pantalaimon, follow Lord Asriel into the other world. The Subtle Knife begins in our own world, where Will Parry, driven by curiosity about his mysterious, missing father and concern for his vulnerable, disturbed mother, accidentally kills an intruder. While fleeing, he finds a 'window' into a sunlit otherworld. What could be a better refuge than a hidden universe? But this universe is a strange, empty place: a city that seems to have been abandoned in such haste that food is left rotting on plates at a sidewalk cafe. The inhabitants of the city, Cittágazze, have fled from the invading Specters, ghostlike creatures that devour the souls of adults. But Specters are harmless and invisible to children, and soon Will meets another fugitive child in Cittágazze: Lyra. Although he does not know it, their lives are soon to become forever intertwined when Lyra's alethiometer gives her one simple command: Help Will find his father. The richly imagined world of Book One seems almost quiet and simple when compared to the turmoil of Book Two. Here 'Dust' is called 'dark matter' and has been joined by a myriad of other complex phenomena, including the Specters and bene elim (angels). One protagonist has been replaced by two, Lyra and Will. Most significant of all, Lyra's truth-giving compass seems to pale in comparison to the power of Will's new acquisition, the subtle knife, the Æsahættr, the knife that will cut ANYTHING. What can it mean to be the bearer of such an instrument? Read Less

Goodreads reviews for His Dark Materials: The Subtle Knife (Book 2)

Ruby in the Smoke