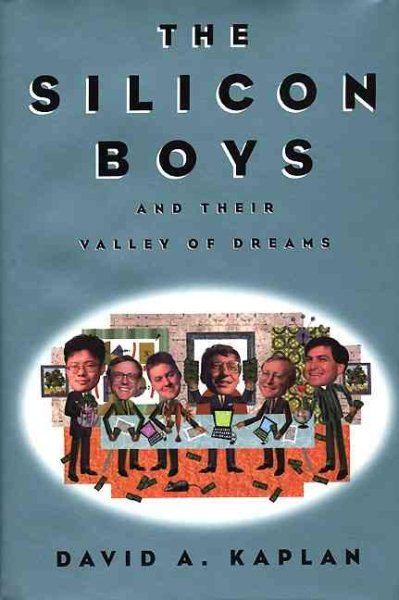 Presents a portrait of Silicon Valley, its entrepreneurs, and the products and companies that have revolutionized the computer age Read More
THE SILICON BOYSJerry YangThe chief Yahoo of Silicon Valley and ultimate Internet tycoon...the poster boy for immigrant success who went from pennies to millions to billions...you'd say Yahoo, too!John DoerrThe J. P. Morgan of the Valley...the man Bill Gates fears most...bankrolled Netscape and Amazon.com...the man so wired he has a cell phone built into his ski helmet.Marc AndreessenThe hottest, coolest, hungriest techno-weenie of his generation...his invention unleashed the World Wide Web and made him a multi-millionaire at twenty-four.Bill GatesDarth Vader, Godzilla, "the Leona Helmsley of technology"--he's the guy everybody loves to hate...the richest man in the galaxy and leader of the Evil Empire known as Microsoft.Jim ClarkFounder of Netscape, daredevil pilot, and owner of the world's greatest cyber-yacht...the serial entrepreneur: "If at first you succeed--try, try again."Steve JobsThe prodigal son of Silicon Valley...started Apple Computer, got kicked out, then returned...arrogant, petty, a master marketer--the guy they hate to love. PLUSThe Valley's No. 1 adolescent...the programmer who could've beaten Bill Gates...Andy "the Mad Hungarian" Grove of Intel...the weirdest town in Silicon Valley...and where to buy eighteen-dollar-a-pound ostrich salami. It is an American icon -- the symbol of technological genius and ineffable wealth. It is the home to the Newest New Thing, where the digital age was born and keeps remaking itself. It's also the only place in the world where you can buy eighteen-dollar-a-pound ostrich salami. It is, of course, Silicon Valley.Now prize-winning Newsweek journalist David A. Kaplan takes us on a riotous romp through the history and culture of the Valley. How did Yahoo get started, what nearly killed Netscape, will Apple survive, who's the most powerful person in Silicon Valley? Steve Jobs, Bill Gates, Jerry Yang, Larry Ellison, Andy Grove, John Doerr, Jim Clark -- the tycoons, the loons, and the hot-air balloons are all here. Based on firsthand accounts and extensive interviews, The Silicon Boys is a portrait of high-tech high jinks and its moneyed lifestyle like no other. If the Valley were a nation, its economy would rank among the world's twelve largest. Depending on yesterday's stock market close, roughly a quarter-million Siliconillionaires live in the Valley. Here they invented the microchip and video games and Internet commerce. But more important, they created a state of mind that's become part of the American imagination. The Valley has its admirable moments, its venal moments, and, best of all, its absurd ones. Read Less

Goodreads reviews for The Silicon Boys: And Their Valley of Dreams

Mine's Bigger: The Extraordinary Tale of the World's Greates...

The Silicon Boys: And Their Valley of Dreams