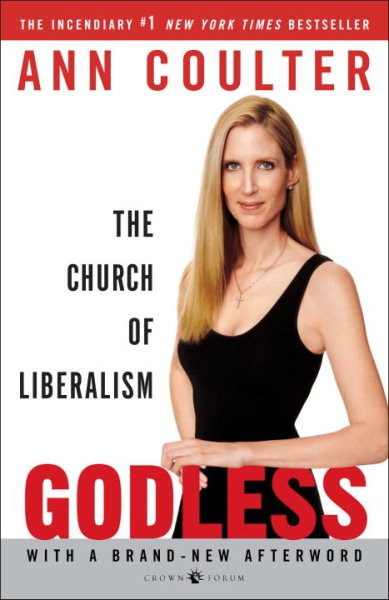 From the conservative spokesperson and author of Slander and How to Talk to a Liberal comes an all new, timely, and thought-provoking study of American politics and religion that looks at the Left's attacks on the Judeo-Christian tradition. Reprint. 300,000 first printing. Read More
"If a martian landed in America and set out to determine the nation's official state religion, he would have to conclude it is liberalism, while Christianity and Judaism are prohibited by law.Many Americans are outraged by liberal hostility to traditional religion. But as Ann Coulter reveals in this, her most explosive book yet, to focus solely on the Left's attacks on our Judeo-Christian tradition is to miss a larger point: liberalism is a religion—a godless one.And it is now entrenched as the state religion of this county.Though liberalism rejects the idea of God and reviles people of faith, it bears all the attributes of a religion. In Godless, Coulter throws open the doors of the Church of Liberalism, showing us its sacraments (abortion), its holy writ (Roe v. Wade), its martyrs (from Soviet spy Alger Hiss to cop-killer Mumia Abu-Jamal), its clergy (public school teachers), its churches (government schools, where prayer is prohibited but condoms are free), its doctrine of infallibility (as manifest in the "absolute moral authority" of spokesmen from Cindy Sheehan to Max Cleland), and its cosmology (in which mankind is an inconsequential accident).Then, of course, there's the liberal creation myth: Charles Darwin's theory of evolution.For liberals, evolution is the touchstone that separates the enlightened from the benighted. But Coulter neatly reverses the pretense that liberals are rationalists guided by the ideals of free inquiry and the scientific method. She exposes the essential truth about Darwinian evolution that liberals refuse to confront: it is bogus science.Writing with a keen appreciation for genuine science, Coulter reveals that the so-called gaps in the theory of evolution are all there is—Darwinism is nothing but a gap. After 150 years of dedicated searching into the fossil record, evolution's proponents have failed utterly to substantiate its claims. And a long line of supposed evidence, from the infamous Piltdown Man to the "evolving" peppered moths of England, has been exposed as hoaxes. Still, liberals treat those who question evolution as religious heretics and prohibit students from hearing about real science when it contradicts Darwinism. And these are the people who say they want to keep faith out of the classroom?Liberals' absolute devotion to Darwinism, Coulter shows, has nothing to do with evolution's scientific validity and everything to do with its refusal to admit the possibility of God as a guiding force. They will brook no challenges to the official religion.Fearlessly confronting the high priests of the Church of Liberalism and ringing with Coulter's razor-sharp wit, Godless is the most important and riveting book yet from one of today's most lively and impassioned conservative voices."Liberals love to boast that they are not 'religious,' which is what one would expect to hear from the state-sanctioned religion. Of course liberalism is a religion. It has its own cosmology, its own miracles, its own beliefs in the supernatural, its own churches, its own high priests, its own saints, its own total worldview, and its own explanation of the existence of the universe. In other words, liberalism contains all the attributes of what is generally known as 'religion.'" —From Godless Read Less

Goodreads reviews for Godless: The Church of Liberalism

Adios, America: The Left's Plan to Turn Our Country into a T...

High Crimes and Misdemeanors: The Case Against Bill Clinton