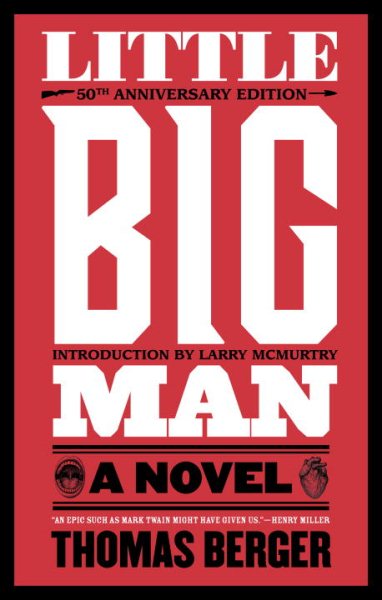 The astonishing reminiscences of an ancient and immodest Indian frontiersman form a witty, lusty, and highly impressive epic, a panoramic enlargement of the way of life in the Old West Read More
'the truth is always made up of little particulars which sound ridiculous when repeated.' So says Jack Crabb, the 111-year-old narrator of Thomas Berger's 1964 masterpiece of American fiction, Little Big Man. Berger claimed the Western as serious literature with this savage and epic account of one man's extraordinary double life.After surviving the massacre of his pioneer family, ten-year-old Jack is adopted by an Indian chief who nicknames him Little Big Man. As a Cheyenne, he feasts on dog, loves four wives, and sees his people butchered by horse soldiers commanded by General George Armstrong Custer. Later, living as a white man once more, he hunts the buffalo to near-extinction, tangles with Wyatt Earp, cheats Wild Bill Hickok, and fights in the Battle of Little Bighorn alongside Custer himself'a man he'd sworn to kill. Hailed by The Nation as 'a seminal event," Little Big Man is a singular literary achievement that, like its hero, only gets better with age.Praise for Little Big Man   'An epic such as Mark Twain might have given us.''Henry Miller   'the very best novel ever about the American West.''The New York Times Book Review   'spellbinding . . . [Crabb] surely must be one of the most delightfully absurd fictional fossils ever unearthed.''Time   'superb . . . Berger's success in capturing the points of view and emotional atmosphere of a vanished era is uncanny. His skill in characterization, his narrative power and his somewhat cynical humor are all outstanding.''The New York Times Read Less

The Return of Little Big Man