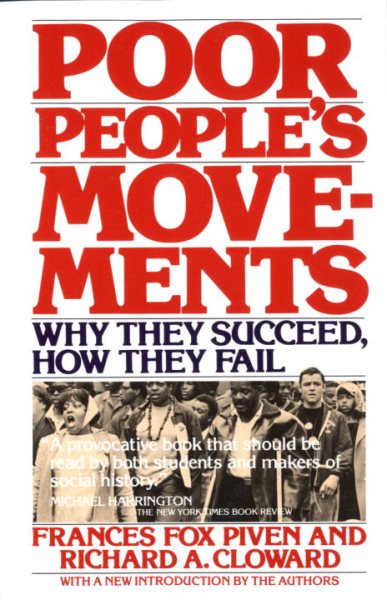 A careful political analysis of the movements of poor people during four periods of American history indicates that gains have been won by defiance of rather than activity within the regular political system. Read More
Have the poor fared best by participating in conventional electoral politics or by engaging in mass defiance and disruption? The authors of the classic Regulating The Poor assess the successes and failures of these two strategies as they examine, in this provocative study, four protest movements of lower-class groups in 20th century America:-- The mobilization of the unemployed during the Great Depression that gave rise to the Workers' Alliance of America-- The industrial strikes that resulted in the formation of the CIO-- The Southern Civil Rights Movement-- The movement of welfare recipients led by the National Welfare Rights Organization. Read Less

Goodreads reviews for Poor People's Movements: Why They Succeed, How They Fail

Why Americans Still Don't Vote: And Why Politicians Want It...