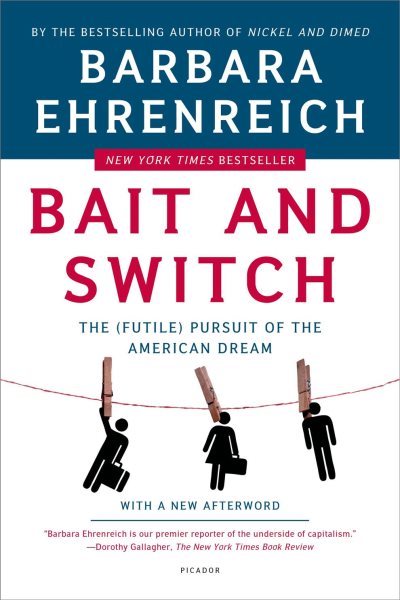 Focuses on the world of white-collar unemployment, describing the woes of "surplus" employees who are forced to confront the realities of financial hardship with little social support or security. Read More
The New York Times bestselling investigation into white-collar unemployment from "our premier reporter of the underside of capitalism"—The New York Times Book ReviewAmericans' working lives are growing more precarious every day. Corporations slash employees by the thousands, and the benefits and pensions once guaranteed by "middle-class" jobs are a thing of the past. In Bait and Switch, Barbara Ehrenreich goes back undercover to explore another hidden realm of the economy: the shadowy world of the white-collar unemployed. Armed with the plausible résumé of a professional "in transition," she attempts to land a "middle-class" job. She submits to career coaching, personality testing, and EST-like boot camps, and attends job fairs, networking events, and evangelical job-search ministries. She is proselytized, scammed, lectured, and—again and again—rejected. Bait and Switch highlights the people who have done everything right—gotten college degrees, developed marketable skills, and built up impressive résumés—yet have become repeatedly vulnerable to financial disaster. There are few social supports for these newly disposable workers, Ehrenreich discovers, and little security even for those who have jobs. Worst of all, there is no honest reckoning with the inevitable consequences of the harsh new economy; rather, the jobless are persuaded that they have only themselves to blame. Alternately hilarious and tragic, Bait and Switch, like the classic Nickel and Dimed, is a searing exposé of the cruel new reality in which we all now live. Read Less

Goodreads reviews for Bait and Switch: The (Futile) Pursuit of the American Dream

Nickel And Dimed: On (Not) Getting By In America

Natural Causes: An Epidemic of Wellness, the Certainty of Dy...