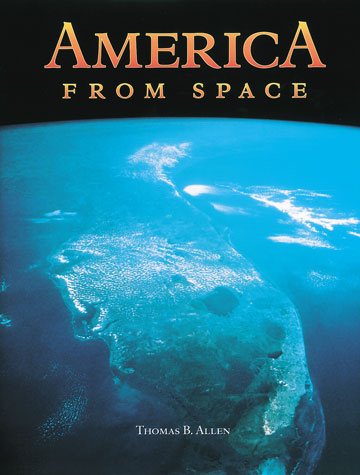 Presents aerial photographs of the different parts of the United States, displaying bodies of water and land contours Read More
From the sprawling cities of California to Maine's island-flecked coast, from the glaciers of Alaska to the beaches of Florida, here is the United States as you have never seen it before. America from Space takes you into orbit over the United States. You see what Space Shuttle astronauts see when they aim their camera at their homeland. Here is America by night, a breathtaking view of the entire nation pulsating with lights marking cities and suburbs. Here are the Great Lakes, the mountains and cities, rivers and seashores -- each image a piece of the nation. Together they create a unique and fascinating portrait of the United States of America. Sections of this book include: Fire and Ice: Hawaii and Alaska The West Coast: from Washington to the Mexican border The West: the wild lands of deserts and canyon The Rockies: the backbone of the continent The Heartland: the grandeur of the Great Plains The Great Lakes: deep waters and fertile lands The Southland: Blue Ridge Mountains, New Orleans, Florida The Northeast Corridor: an urban swath along the coast. In Wyoming's Bighorn Basin, stunning views are transformed into geological data: bright yellow marks an oil field, orange shows a mesa; red, purple and blue color irrigated field. In a flood region of Texas, varying blue and purple shades show what lands were under water. What the images show most of all is the beauty of the land and the seas that touch it. "Life is like landscape," Charles Lindbergh wrote after his historic solo flight across the Atlantic. "You live in the midst of it, but can describe it only from the vantage point of distance." Here is a new vantage point, a new way of seeing and understanding our country. Read Less

Goodreads reviews for America from Space

The Encyclopedia of Espionage

Tories: Fighting for the King in America's First Civil War