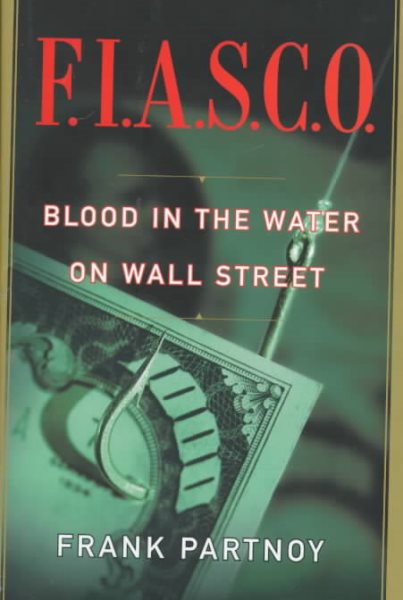 Offers an expose of the financial derivatives market, where ruthless salesmen take advantage of the complexity of the market and their client's naivete, and describes several major investment disasters Read More
In F.I.A.S.C.O.: Blood in the Water on Wall Street, a former derivatives salesman takes readers onto the trading floor of a leading investment bank—and in a tell-all, no-holds-barred exposé, reveals for the first time the ugly truth about these complex financial products and the people who peddle them. Writing with the same eye for telling details as Michael Lewis in Liar’s Poker, Frank Partnoy shows how the once genteel world of investment banking has now become a place where the rallying cry is "There’s blood in the water. Let’s go kill someone."Partnoy was in his late twenties when he landed the job of his dreams—a position in Morgan Stanley’s Derivatives Products Group, the single most profitable division of the venerable investment bank. With vivid character sketches and a wealth of funny-yet-disturbing anecdotes, Partnoy takes us inside the culture of Morgan Stanley’s derivatives group. Encouraged by upper management and egged on by gun-toting senior salesmen, derivatives had become a business-as-war, take-no-prisoners operation where people pored over Soldier of Fortune and gloated when they sold a product that "ripped off" a client’s face.As he leads us through the ups and downs of his fifteen months at Morgan Stanley, Partnoy explains in plain English what derivatives are—and shows how he and the other "rocket scientists" at the bank custom-designed these arcane financial products to dodge government regulators, encourage foreign currency speculation by pension and mutual funds, disguise risky gambles with AAA Standard & Poor’s ratings, and avoid capital gains taxes for weathy individuals. He also details, for the first time, the deal that earned Morgan Stanley the fattest fee in Wall Street history—a $74.5 million profit for devising a derivative that wiped hundreds of millions in losses off a Japanese company’s balance sheet.But dreaming up ever more complicated derivatives products—Dollarized Yield Curve Notes, Constant Maturity Treasury Floaters, Trigger Notes, and Total Return Swaps, to name a few—was never enough. For the bank to earn its fee, they had to be sold—usually, as Partnoy notes, either to "cheaters" (fund managers who wanted riskier investments than their regulators or charters normally allowed) or to "widows and orphans" (unsophisticated fund managers who couldn’t understand the risks in fine print).Throughout the book, Partnoy gives us a trading-floor view of the disasters fueled by derivatives trading and provides the formula of greed, daring, and ingenuity that are the basic ingredients of all derivatives. Written with humor, insight, and a mounting sense of moral outrage, F.I.A.S.C.O. is both a brilliant insider’s account of investment banking today and a blistering indictment of the largely unregulated market in derivatives—a book that everyone who has a pension plan or invests in mutual funds needs to read. Read Less

Goodreads reviews for F.I.A.S.C.O.: Blood in the Water on Wall Street

Fiasco: Blood in the Water on Wall Street