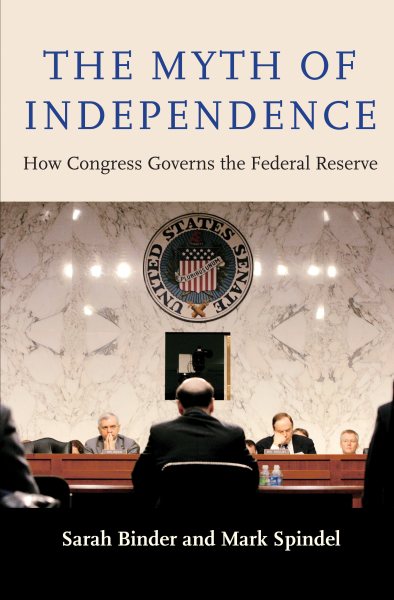 Born out of crisis a century ago, the Federal Reserve has become the most powerful macroeconomic pol... Read More
Born out of crisis a century ago, the Federal Reserve has become the most powerful macroeconomic policymaker and financial regulator in the world. The Myth of Independence traces the Fed’s transformation from a weak, secretive, and decentralized institution in 1913 to a remarkably transparent central bank a century later. Offering a unique account of Congress’s role in steering this evolution, Sarah Binder and Mark Spindel explore the Fed’s past, present, and future and challenge the myth of its independence.Binder and Spindel argue that recurring cycles of crisis, blame, and reform propelled lawmakers to create and revamp the powers and governance of the Fed at critical junctures, including the Panic of 1907, the Great Depression, the postwar Treasury-Fed Accord, the inflationary episode of the 1970s, and the recent financial crisis. Marshaling archival sources, interviews, and statistical analyses, the authors pinpoint political and economic dynamics that shaped interactions between the legislature and the Fed, and that have generated a far stronger central bank than anticipated at its founding. The Fed today retains its unique federal style, diluting the ability of lawmakers and the president to completely centralize control of monetary policy.In the long wake of the financial crisis, with economic prospects decidedly subpar, partisan rivals in Congress seem poised to continue battling over the Fed’s statutory mandates and the powers given to achieve them. Examining the interdependent relationship between America’s Congress and its central bank, The Myth of Independence presents critical insights about the future of monetary and fiscal policies that drive the nation’s economy. Read Less

Goodreads reviews for The Myth of Independence: How Congress Governs the Federal Reserve