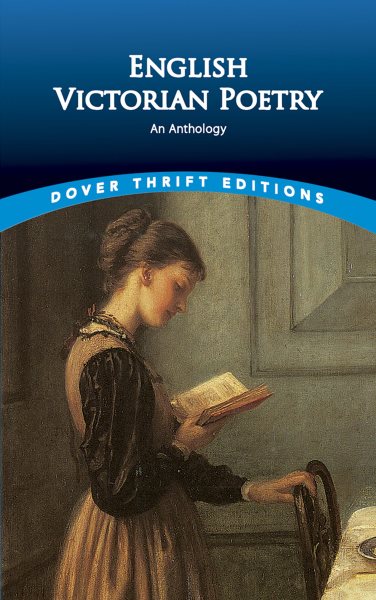 Over 170 beloved poems by the major poets of the 19th century, including works by Tennyson, Browning, Arnold, Rossetti, Meredith, Swinburne, Hopkins, Kipling, and others. An introduction and biographical notes on the poets are included. Read More
Coinciding with the reign of Queen Victoria, the Victorian era of English literature is generally dated from the late 1930s to the turn of the 20th century and includes a roster of poets whose works are of perennial interest to students as well as enduringly popular with poetry lovers and other readers. This outstanding, modestly priced anthology presents over 170 poems by the major poets of the period, including Alfred, Lord Tennyson; Robert Browning; Elizabeth Barrett Browning; Arthur Hugh Clough; Edward FitzGerald; Matthew Arnold; Dante Gabriel Rossetti; Christina Rossetti; Coventry Patmore; George Meredith; William Ernest Henley; Algernon Charles Swinburne; Gerard Manley Hopkins; Rudyard Kipling; and many others. Carefully selected to include the works most often studied in literature courses, high school through college, this anthology is ideal for classroom use, independent study, and personal perusal. An introduction and brief biographical notes on the poets are included. Read Less