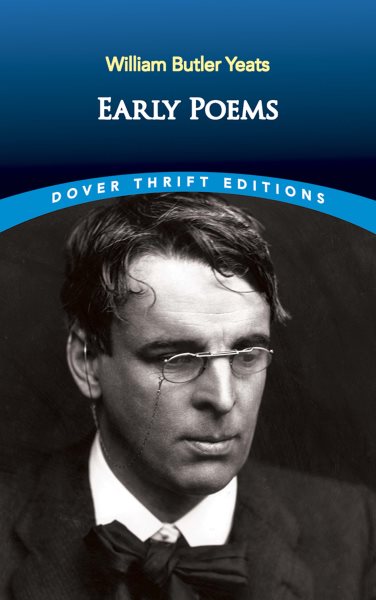 Rich selection of 134 poems published between 1889 and 1914: "Lake Isle of Innisfree," "When You Are Old," "Down by the Salley Gardens," many more. Note. Alphabetical lists of titles and first lines. Includes a selection from the Common Core State Standards Initiative. Read More
One of the greatest poets of any century, the Nobel laureate William Butler Yeats (1865–1939) drew upon Irish folklore and myth as inspiration for much of his early poetry. Mythic themes as well as many other topics are masterfully explored in this rich selection of 134 lyrics chiefly selected from six volumes of verse published between 1889 and 1914. Among the poems included are "The Stolen Child" and "Down by the Salley Gardens" (Crossways, 1889); "To the Rose upon the Rood of Time," "The Lake Isle of Innisfree," "When You Are Old," and "To Ireland in the Coming Times" (The Rose, 1893); "The Song of Wandering Aengus" and "A Poet to His Beloved" (The Wind Among the Reeds, 1899); "The Song of Red Hanrahan" (In the Seven Woods, 1903); "No Second Troy" and "The Fascination of What's Difficult" (The Green Helmet and Other Poems, 1910); "To a Friend Whose Work Has Come to Nothing" and "To a Shade" (Responsibilities, 1914); and many more. This representative selection offers readers a splendid sampling of the distinctive Yeatsian voice — romantic, yearning, full of the magic and mysticism Yeats imbibed as a boy in the West of Ireland, later counterbalanced by an anguished realism grounded in the poet's nationalistic and political sympathies. Read Less