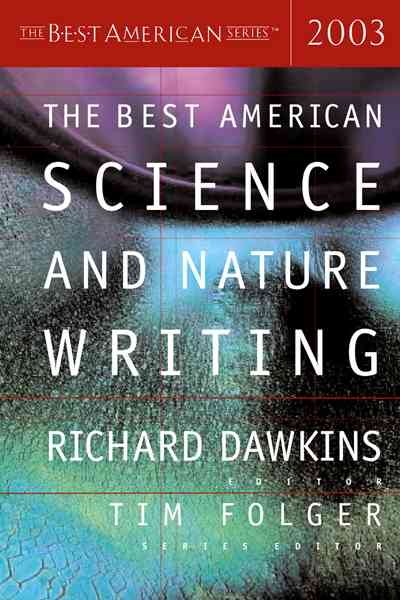 Collects nature- and science-based essays by such authors as Anne Fadiman, Brian Hayes, Cullen Murphy, and Gary Taubes. Read More
In his introduction to The Best American Science and Nature Writing 2003, Richard Dawkins asks, "What is it about science that really gets your blood running?" The authors of the twenty-nine pieces chosen for this volume all offer "eclectic, provocative" answers (Entertainment Weekly).In "Raising the Dead," Scott Weidensaul airs the faint but spine-tingling hope of one day bringing Thylacinus back from the dead through cloning pickled museum specimens. Ian Frazier's extraordinary science reporting in "Terminal Ice" makes glaciers come alive as beautiful and awe-inspiring natural forces, and as harbingers of a globally warmed future. Oliver Sacks, indelibly profiled in Steve Silberman's "The Fully Immersive Mind of Oliver Sacks," contributes a piece himself, on our perennial fascination with extraterrestrial life. Timothy Ferris writes in praise of amateur astronomers; David Ewing Duncan investigates what we might not want to know about genetics; and Elizabeth Loftus takes a stand on the science of false memory.As Richard Dawkins writes, "The science and nature writing of 2002 is not the same as it was ten years ago, partly because we now know more about what is eternally true, but also because the world in which we live changes, and so does science's impact upon it. Some of the essays and articles in this book are firmly date-stamped; some are timeless. We need both."Since its inception in 1915, the Best American series has become the premier annual showcase for the country's finest short fiction and nonfiction. For each volume, a series editor reads pieces from hundred of periodicals, then selects between fifty and a hundred outstanding works. That selection is pared down to the twenty or so very best pieces by a guest editor who is widely recognized as a leading writer in his or her field. This unique system has helped make the Best American series the most respected -- and most popular -- of its kind.The Best American Science and Nature Writing 2003, edited by Richard Dawkins, is another "eloquent, accessible, and even illuminating" collection (Publishers Weekly). Here are the best and brightest writers on science and nature, writing on such wide-ranging subjects as astronomy's new stars, archaeology, the Bible, "terminal" ice, and memory faults.Natalie Angier Timothy Ferris Ian Frazier Elizabeth F. Loftus Steven Pinker Oliver Sacks Steven Weinberg Edward O. Wilson Read Less

The Best American Science and Nature Writing 2003 (The Best...