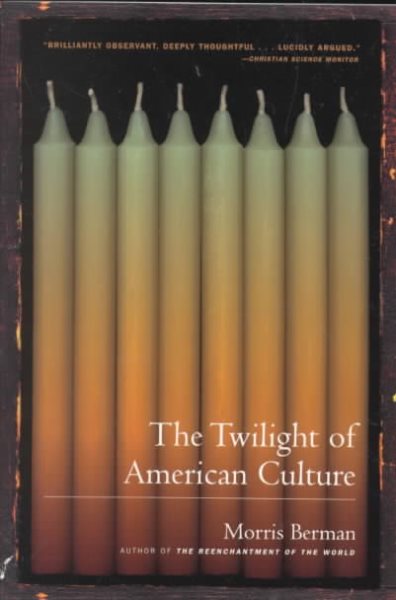 An emerging cult classic about America's cultural meltdown—and a surprising solution. Read More
A prophetic examination of Western decline, The Twilight of American Culture provides one of the most caustic and surprising portraits of American society to date. Whether examining the corruption at the heart of modern politics, the "Rambification" of popular entertainment, or the collapse of our school systems, Morris Berman suspects that there is little we can do as a society to arrest the onset of corporate Mass Mind culture. Citing writers as diverse as de Toqueville and DeLillo, he cogently argues that cultural preservation is a matter of individual conscience, and discusses how classical learning might triumph over political correctness with the rise of a "a new monastic individual"—a person who, much like the medieval monk, is willing to retreat from conventional society in order to preserve its literary and historical treasures. "Brilliantly observant, deeply thoughtful ....lucidly argued."—Christian Science Monitor Read Less

Goodreads reviews for The Twilight of American Culture

The Twilight of American Culture

Coming to Our Senses: Body and spirit in the hidden history...