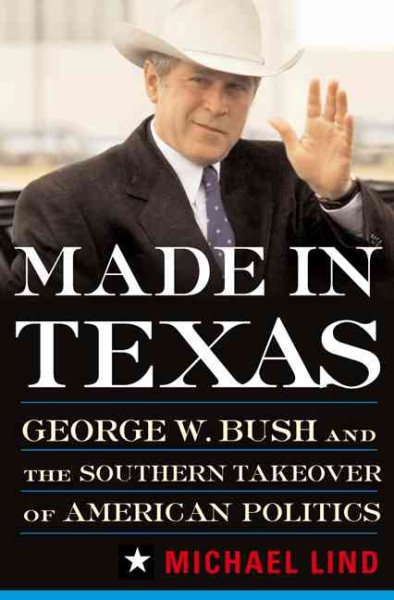 Describes the political culture and tradition of Texas and how it has influenced George W. Bush, the country, and the world. Read More
In this book, the political writer Michael Lind, a fifth-generation native of Texas, reveals how the political tradition of one state is shaping the fate of the country and the world. Although Bush is a Republican, in his world view and his policies he is the heir of the Southern conservatives who once dominated the right wing of the Democratic Party. The economic policy of George W. Bush reflects the cheap labor, low-tax tradition of Southern farmers, ranchers and oil men, while Bush's social agenda is that of Protestant fundamentalists in Texas and similar states. Their prophecy-based beliefs about the coming end of the world influence Bush's Middle East policy, while his disdain for alliances and strategy of military unilateralism reflects the age-old military ethic of the American South. The combination of regressive economic policy, religious fundamentalism and unthinking militarism has long been familiar in Texas. Today, thanks to George W. Bush, it threatens the future of the United States - and maybe the entire world.Fortunately, George W. Bush represents only one tradition in Texas. There is another, more enlightened Texan tradition - the modernist tradition of high-tech industry and activist government represented by figures as different as Lyndon Johnson, H. Ross Perot and Admiral Bobby Ray Inman. The best antidote to Bush conservatism is made in Texas, too. Read Less

Goodreads reviews for Made in Texas: George W. Bush and the Southern Takeover of American Politics

Vietnam: The Necessary War: A Reinterpretation of America's...

The Radical Center: The Future of American Politics

The Next American Nation: The New Nationalism And The Fourth...