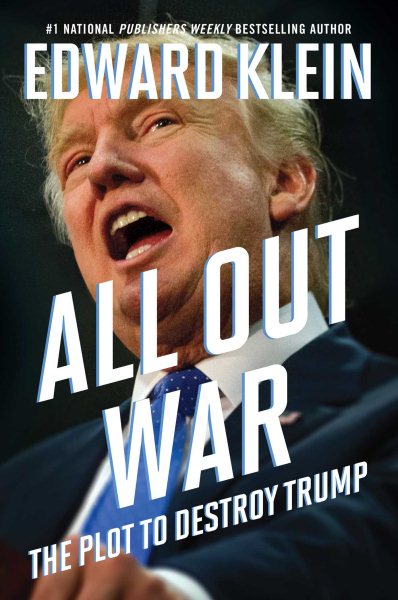 Argues that an Obama-led conspiracy to undermine President Trump's authority in the White House may have lasting effects on the United States's political culture. Read More
A Wall Street Journal bestseller ALL OUT WAR! That's what the media, the Democrats, and the Never-Trump Republicans are waging on the democratically elected president of the United States. With ferocity not seen since the Civil War, the Washington establishment and the radical Left are joining forces in an attempted coup d’état to overturn the will of the people and return power to the political and media elites who have never been more unhinged. In All Out War: The Plot to Destroy Trump, investigative reporter and national best-selling author Edward Klein reveals: How the plot to destroy Trump was initiated in the Obama White House Two EXCLUSIVE FBI reports that prove the existence of “the Deep State” working against the Trump agenda, warn of ISIS ties to the anti-Trump "resistance,” and highlight the danger of domestic terrorism from the anti-Trump radicals The scandal you don’t yet know about: why Hillary Clinton could still be facing investigation by the FBI and prosecution by the Justice Department “In America, you are entitled to your own opinion,” Klein writes. “But you are not entitled to overthrow the democratically elected president of the United States and inflict irreparable damage on our country. That, however, is what Donald Trump’s enemies on the Left and Right are doing. Through a variety of underhanded tactics—lies, leaks, obstruction, and violence—they are working to delegitimize President Trump and drive him from office before he can drain the swamp and take away their power.”Stunning in its revelations, meticulous in its reporting, there can be no timelier or more important political book than All Out War. Read Less

Goodreads reviews for All Out War: The Plot to Destroy Trump

UNLIKEABLE: The Problem with Hillary