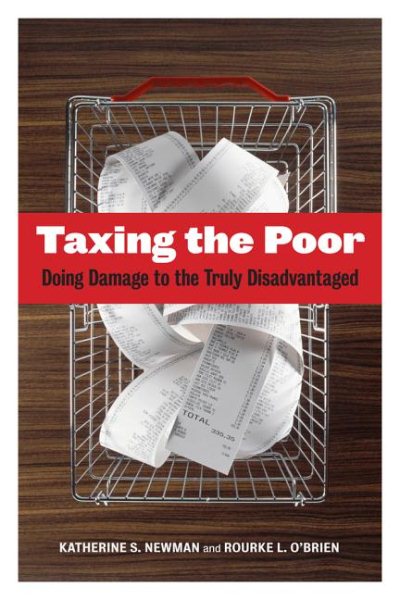 "New South? Not really. A compelling demonstration that the South's regressive taxation wreaks so much havoc that the federal government has no choice but to swoop in at great cost and attempt to band-aid all the poverty and dysfunction. The best argument yet for a new federalism that says enough is enough."--David B. Grusky, Stanford University"Taxing the Poor makes extremely important points that are not now--but must be--part of the American discussion of poverty and social policy. The authors make these points with fascinating details on the history of how we got to this place. Bravo to Newman and O'Brien for thoroughly laying out a politcal economy of taxation."--Robin Einhorn, author of American Taxation, American Slavery Read More
This book looks at the way we tax the poor in the United States, particularly in the American South, where poor families are often subject to income taxes, and where regressive sales taxes apply even to food for home consumption. Katherine S. Newman and Rourke L. O’Brien argue that these policies contribute in unrecognized ways to poverty-related problems like obesity, early mortality, the high school dropout rates, teen pregnancy, and crime. They show how, decades before California’s passage of Proposition 13, many southern states implemented legislation that makes it almost impossible to raise property or corporate taxes, a pattern now growing in the western states. Taxing the Poor demonstrates how sales taxes intended to replace the missing revenue—taxes that at first glance appear fair—actually punish the poor and exacerbate the very conditions that drove them into poverty in the first place. Read Less