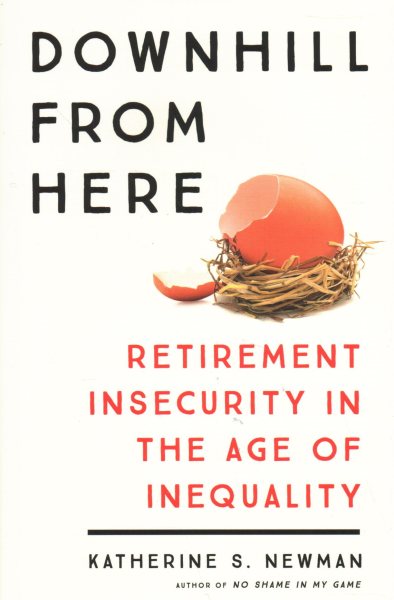 A sharp examination of the troubled state of retirement in America shares sobering insights into how the real estate crash and limited social security are preventing retirement and inducing widespread poverty in aging Baby Boomers. Read More
A sharp examination of the looming financial catastrophe of retirement in America.As millions of Baby Boomers reach their golden years, the state of retirement in America is little short of a disaster. Nearly half the households with people aged 55 and older have no retirement savings at all. The real estate crash wiped out much of the home equity that millions were counting on to support their retirement. And the typical Social Security check covers less than 40% of pre-retirement wages—a number projected to drop to under 28% within two decades. Old-age poverty, a problem we thought was solved by the New Deal, is poised for a resurgence.With dramatic statistics and vivid portraits, acclaimed sociologist Katherine S. Newman shows that the American retirement crisis touches us all, cutting across class lines and generational divides. White-collar managers have seen retirement benefits vanish; Teamsters have had their pensions cut in half; bankrupt cities like Detroit have walked away from their commitments to municipal workers. And for Generation X, the prospects are even worse: a fifth of them expect to never be able to retire. Only the vaunted “one percent” can face retirement without fear.Other countries are confronting similar demographic challenges, yet they have not abandoned their social contract with seniors. Downhill From Here makes it clear that America, too, can—and must—do better. Read Less

Goodreads reviews for Downhill from Here: Retirement Insecurity in the Age of Inequality