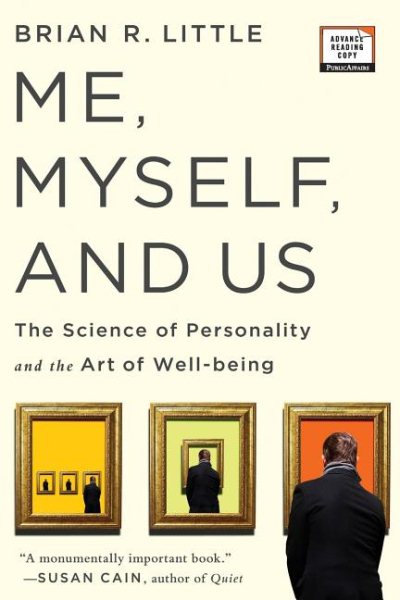 An in-depth exploration of new scientific findings in personality research comprehensively explains what today's psychologists are learning about the origins of human consciousness, the inherent nature of personality and the sources of individual conduct. Read More
"In the past few decades, personality psychology has made considerable progress in raising new questions about human nature-and providing some provocative answers. New scientific research has transformed old ideas about personality based on the theoriesof Freud, Jung, and the humanistic psychologies of the nineteen sixties, which gave rise to the simplistic categorizations of the Meyer-Briggs Inventory and the 'enneagream'. But the general public still knows little about the new science and what it reveals about who we are. In Me, Myself, and Us, Brian Little, one of the psychologists who helped re-shape the field, provides the first in-depth exploration of the new personality science and its provocative findings for general readers. The book explores questions that are rooted in the origins of human consciousness but are as commonplace as yesterday's breakfast conversation. Are our first impressions of other people's personalities usually fallacious? Are creative individuals essentially maladjusted? Are our personality traits, as William James put it "set like plaster" by the age of thirty? Is a belief that we are in control of our lives an unmitigated good? Do our singular personalities comprise one unified self or a confederacy of selves, andif the latter, which of our mini-me-s do we offer up in marriage or mergers? Are some individuals genetically hard-wired for happiness? Which is the more viable path toward human flourishing, the pursuit of happiness or the happiness of pursuit? Little provides a resource for answering such questions, and a framework through which readers can explore the personal implications of the new science of personality. Questionnaires and interactive assessments throughout the book facilitate self-exploration, and clarify some of the stranger aspects of our own conduct and that of others. Brian Little helps us see ourselves, and other selves, as somewhat less perplexing and definitely more intriguing. This is not a self-help book, but students at Harvard who took the lecture course on which it is based claim that it changed their lives. "-- Read Less

Goodreads reviews for Me, Myself, and Us: The Science of Personality and the Art of Well-Being

Who Are You, Really?: The Surprising Puzzle of Personality (...

Eva and the Lost Pony: A Branches Book (Owl Diaries #8)