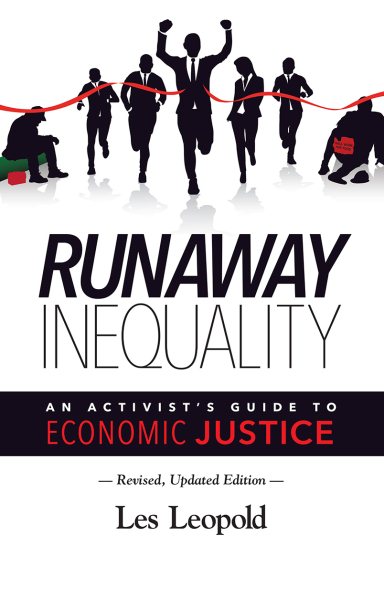 Revised, Updated EditionRunaway inequality is now America’s most critical economic fact of life. In... Read More
Revised, Updated EditionRunaway inequality is now America’s most critical economic fact of life. In 1970, the ratio of pay between the top 100 CEOs and the average worker was 45 to 1. Today it is a shocking 829 to one! During that time a new economic philosophy set in that cut taxes, deregulated finance, and trimmed social spending. Those policies set in motion a process that greatly expanded the power of financial interests to accelerate inequality. But how exactly does that happen?Using easy-to-understand charts and graphs, Runaway Inequality explains the process by which corporation after corporation falls victim to systematic wealth extraction by banks, private equity firms, and hedge funds. It reveals how financial strip-mining puts enormous downward pressure on jobs, wages, benefits, and working conditions, while boosting the incomes of financial elites.But Runaway Inequality does more than make sense of our economic plight. It also shows why virtually all the key issues that we face—from climate change to the exploding prison population—are intimately connected to rising economic inequality.Most importantly, Runaway Inequality calls upon us to build a common movement to tackle the sources of increasing income and wealth inequality. As the author makes clear, the problem will not cure itself. It will take enormous energy and dedication to bring economic justice and fairness back to American society.The book is divided into four parts:Part I: What is the fundamental cause of runaway economic inequality? What has made our economy less fair and left most of us less secure?Part II: How does the United States really compare with other major developed countries? How do we stack up on quality of life, health, and well-being?Part III: What does economic inequality have to do with so many of the critical issues we face, including taxes, debt, education, criminal justice, racism, climate change, foreign trade, and war?Part IV: What concrete steps can we take to begin building a fair and just society? From the book: “There is nothing in the economic universe that will automatically rescue us from runaway inequality. There is no pendulum, no invisible political force that ‘naturally’ will swing back towards economic fairness. Either we wage a large-scale battle for economic, social, and environmental justice, or we will witness the continued deterioration of the world we inhabit. The arc of capitalism does not bend towards justice. We must bend it.” Read Less

The Looting of America: How Wall Street's Game of Fantasy Fi...

Your Message and the Media: The Complete and Practical Guide...