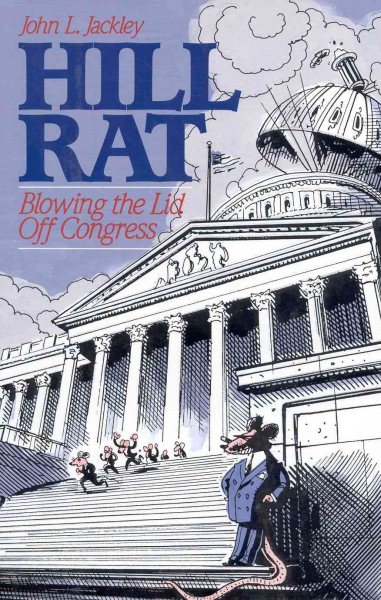 A former Democratic political consultant and congressional aide reveals how he lied, manipulated media images, and spent thousands of dollars of taxpayers' money to re-elect his congressman Read More
As a top aide to powerful Texas Congressman Ronald Coleman, John Jackley watched the nation's highest elected officials lie, manipulate media images, and spend millions of taxpayer dollars to stay in power. The mind-boggling scope of the abuse of perks and privilege by both legislators and their staffers finally shocked him into reality.What began as a secret journal for his children to clear his conscience has become Hill Rat, a journey behind Congress' closed doors and into the corrupt back alleys of power. With both humor and outrage, Jackley reveals how the promise of Congress has been hijacked and corrupted by the current crop of careerist incumbents. "Today," he writes, "a successful congressman has the fundraising ability of a hooker trying to make cab fare home and the morals of a big-time football coach!"His account is laced with the names of Capitol Hill's most prominent legislators--Majority Leader Richard Gephardt, Speaker of the House Thomas Foley, Ron Dellums, Bill Alexander, Minority Whip Newt Gingrich, Thomas Luken, and scores of others. Jackley also reveals, with names, dates, and examples, the outrageous power of Congressional staffers--"Hill Rats"--who "run the engines of democracy on a daily basis and pride themselves on their ability to do anything in the name of their cause."To show the flagrant abuse of taxpayers' money for re-election purposes, Jackley points out that in just forty-eight hours in early 1992, the House mailed more than 58 million newsletters and postcards. In 1990, the first post-Jim Wright, post-congressional scandal election, 96% of the incumbents who ran were reelected. Even in 1988, only six Members running for re-election were defeated, a turnover rate less than that of the Soviet Politburo.From previously untold Congressional involvement in Oliver North's contra re-supply network to Democratic complicity in the S&L crisis to the taxpayer-funded incumbent protection plan, Hill Rat reveals secrets backed by hard evidence that will shake the House and shock the nation. Read Less

Goodreads reviews for Hill Rat: Blowing the Lid Off Congress

All over but the Shoutin'

The Road Less Traveled and Beyond: Spiritual Growth in an Ag...

Return to Love: Reflections on the Principles of a Course in...