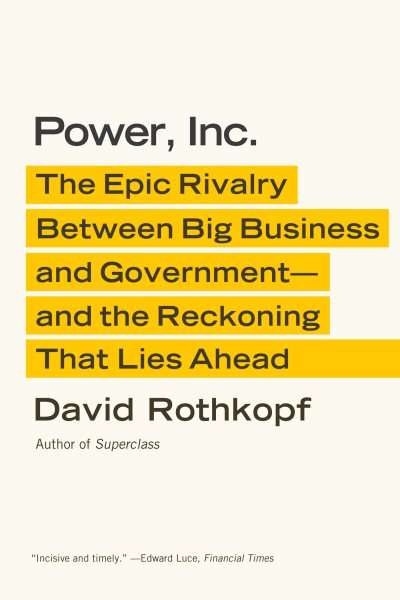 The acclaimed author of Superclass traces the rise of private power while explaining that thousands of companies have greater power than all but a handful of states, predicting struggles between major capitalist interests that are introducing new visions about how the world should work. Reprint. 75,000 first printing. Read More
The world's largest company, Wal-Mart Stores, has revenues higher than the GDP of all but twenty-five of the world's countries. Its employees outnumber the populations of almost a hundred nations. The world's largest asset manager, a secretive New York company called Black Rock, controls assets greater than the national reserves of any country on the planet. A private philanthropy, the Bill and Melinda Gates Foundation, spends as much worldwide on health care as the World Health Organization. The rise of private power may be the most important and least understood trend of our time. David Rothkopf provides a fresh, timely look at how we have reached a point where thousands of companies have greater power than all but a handful of states. Beginning with the story of an inquisitive Swedish goat wandering off from his master and inadvertently triggering the birth of the oldest company still in existence, Power, Inc. follows the rise and fall of kings and empires, the making of great fortunes, and the chaos of bloody revolutions. A fast-paced tale in which champions of liberty are revealed to be paid pamphleteers of moneyed interests and greedy scoundrels trigger changes that lift billions from deprivation, Power, Inc. traces the bruising jockeying for influence right up to today's financial crises, growing inequality, broken international system, and battles over the proper role of government and markets.Rothkopf argues that these recent developments, coupled with the rise of powers like China and India, may not lead to the triumph of American capitalism that was celebrated just a few years ago. Instead, he considers an unexpected scenario, a contest among competing capitalisms offering different visions for how the world should work, a global ideological struggle in which European and Asian models may have advantages. An important look at the power struggle that is defining our times, Power, Inc. also offers critical insights into how to navigate the tumultuous years ahead. Read Less

Goodreads reviews for Power, Inc.: The Epic Rivalry Between Big Business and Government--and the Reckoning That Lies Ahead

Traitor: A History of American Betrayal from Benedict Arnold...

Power, Inc.: The Epic Rivalry Between Big Business and Gover...