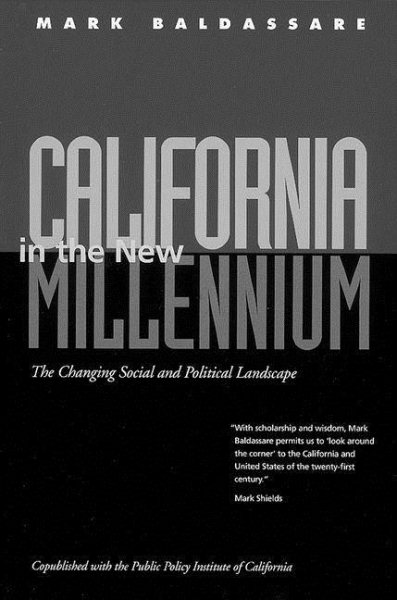 An insightful portrait of what the future holds for the rapidly changing state of California focuses on political distrust, racial and ethnic change, and regional diversity as the central factors that will affect the state's political and social climate. Read More
"Baldassare's discussions of California's demographic and geographic diversity are fresh and innovative. The very large, original surveys that the author collected provide important information."--Bruce Cain, Director, Institute of Governmental Studies, University of California, Berkeley"Mark Baldassare has probed as deeply and wisely as anyone ever has into that most fascinating and, at times, most enigmatic of public phenomena, the behavior of the California voter. With A California State of Mind, he's made an indispensable contribution to our understanding of the politics of our time."--Peter Schrag, author of Paradise Lost: California's Experience, America's Future"Mark Baldassare provides the next best thing to a crystal ball for California's future. This book should be required reading for all public officials in California, especially those who think they are up to the challenge of leading the Golden State into the 21st Century."--Ruben Barrales, President and CEO, Joint Venture: Silicon Valley Network"Through his keen insights on the rapidly changing cross currents of political and social life in California, Mark Baladassare has provided us with not only a vivid description of where the State is today, but a thought provoking view of where America may be going."--Richard T. Schlosberg III, President and CEO, the David & Lucile Packard Foundation"California in the New Millennium contains a wealth of data and valuable analysis concerning the political, demographic, and social changes affecting governance in the nation's most populous and diverse state. This book offers a sobering-and challenging-portrait of the bellwether state as it enters the 21st century. It provides America's leaders and citizens a window to the country's future."--Sherry Bebitch Jeffe, senior associate at the School of Politics and Economics at Claremont Graduate University, contributing editor to Opinion in the Los Angeles Times, and political analyst for KCAL-TV in Los Angeles"What do you call four disparate states populated by mutually suspicious ethnic communities united by a common distrust of government? The Balkans? No. California. In this sharp and engaging book, Baldassare sets out what needs to be done for California to make it in the 21st Century."--Bill Schneider, Senior Political Analyst, CNN"In so many ways, the nation state of California today--with all its promise and all its problems--is the United States of Tomorrow. To understand the nation's future, we must first look to this Golden State. In his understanding and knowledge of California and its people, Mark Baldassare is second to none. With scholarship and wisdom, in California in the New Millennium: The Changing Social and Political Landscape Mark Baldassare permits us to 'look around the corner' to the California and the United States of the 21st Century."--Mark Shields, Syndicated Columnist"Baldassare highlights the enormity of change which faces California in the years ahead. He rightly calls on public leaders and citizens alike to thoughtfully confront challenges of unprecedented scale and impact."--Philip Angelides, Treasurer, State of California"Mark Baldassare has provided a much-needed, one-stop source for pertinent data that explains California's political landscape-today and, most likely, far into the future. Read it and you'll become an expert. If you're already an expert, this will keep you ahead of the curve."--George Skelton, Los Angeles Times Political Columnist "No one knows how Californians think about politics better than Baldassare does. A California State of Mind will be a great success. Rich with data, it examines a critical topic from several viewpoints. Anyone interested in California politics should read this book."--Jack Peltason, coauthor of Government by the People and Understanding the Constitution Read Less

Goodreads reviews for California in the New Millennium: The Changing Social and Political Landscape

The Simpsons: A Complete Guide to Our Favorite Family