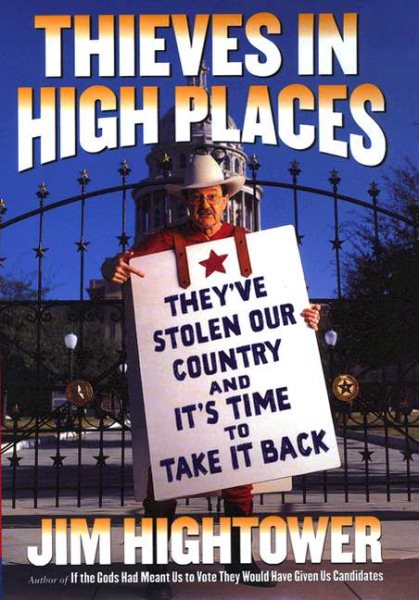 A humorous road map for taking power back to grassroots America, by the populist radio host, offers a tongue-in-cheek analysis of today's government while sharing stories of people who have retaken control of their communities. Read More
America listens to Jim Hightower. More than eighty thousand people subscribe to The Hightower Lowdown Newsletter while his radio show is aired on more than sixty public and commercial radio stations. In They've Stolen Our Country and It's Time To Take It Back, he takes on the Bushites, the Wobblycrats, and the corporate Kleptocrats, digging up behind-the-scenes dirt that the corporate media overlooks-like BushCo's "Friday Night Massacres," what's happened to our food, and the Bush plan for empire. But the book also offers grassroots solutions, drawing on Hightower's Rolling Thunder Down-Home Democracy Tour, a traveling festival of rebellion against every tentacle of the corporate-politico power grab. At kitchen tables all over America, Hightower has tapped into the thriving activist networks that are our country's grassroots muscle, and his book tells their uplifting stories of retaking control of their communities. This is the real America that the rest of the world doesn't get to see. With his unique blend of wit and outrage, Jim Hightower "lights a prairie fire"-and it's just the spark that his growing national audience craves. Read Less

Goodreads reviews for Thieves in High Places: They've Stolen Our Country--And It's Time to Take It Back