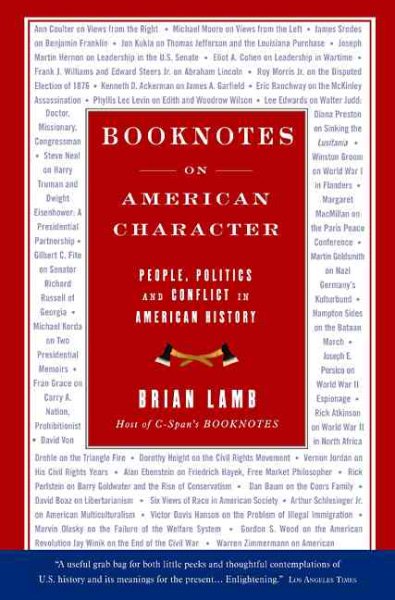 Contemporary writers and historians examine America's national character, looking at events throughout history, including the 1876 presidential election, the civil rights movement, and the Vietnam War. Read More
Over the past twenty-five years, C-SPAN has established itself as a national treasure. And Booknotes, the flagship of its book programming, has become the premier place to see serious, thoughtful nonfiction get its television due. Over the past fifteen years, Brian Lamb, the CEO of C-SPAN and host of Booknotes, has interviewed 765 authors on the program, and these deep and wide-ranging interviews have been the basis for three bestselling Booknotes books. Now, in a new collection, Booknotes: On American Character, Lamb has selected seventy original pieces that reveal something about America: the nation's people, history, and character. Here are biographies of artists, businessmen, politicians, and inventors; stories of events famous, infamous, and less well-known in the nation's history; a look at how politics works in America and how the nation responds to conflict. Our leading historians, journalists, and public figures draw from a diverse set of sources to examine what kind of nation and people we are. The result is a valuable addition to the Booknotes legacy and a welcome read for any fan of the program. Read Less

Who's Buried in Grant's Tomb? A Tour of Presidential Gravesi...