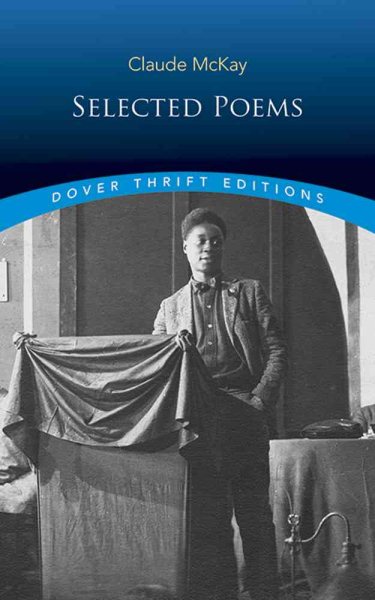 New compilation of verse by an important Jamaican-American poet. Dialect verse, standard English poems from Harlem Shadows, uncollected works, more. Edited and with an introduction by Joan R. Sherman. Read More
In his 1918 autobiographical essay, "A Negro Poet Writes," Claude McKay (1889–1948), reveals much about the wellspring of his poetry."I am a black man, born in Jamaica, B.W.I., and have been living in America for the last years. It was the first time I had ever come face to face with such manifest, implacable hate of my race, and my feelings were indescribable … Looking about me with bigger and clearer eyes I saw that this cruelty in different ways was going on all over the world. Whites were exploiting and oppressing whites even as they exploited and oppressed the yellows and blacks. And the oppressed, groaning under the leash, evinced the same despicable hate and harshness toward their weaker fellows. I ceased to think of people and things in the mass. [O]ne must seek for the noblest and best in the individual life only: each soul must save itself."So wrote the first major poet of the Harlem Renaissance, whose collection of poetry, Harlem Shadows (1922), is widely regarded as having launched the movement. But McKay's literary significance goes far beyond his fierce condemnations of racial bigotry and oppression, as is amply demonstrated by the universal appeal of his sonnet, "If We Must Die," recited by Winston Churchill in a speech against the Nazis in World War II.While in Jamaica, McKay produced two works of dialect verse, Songs of Jamaica and Constab Ballads, that were widely read on the island. In richly authentic dialect, the poet evoked the folksongs and peasant life of his native country. The present volume, meticulously edited and with an introduction by scholar Joan R. Sherman, includes a representative selection of this dialect verse, as well as uncollected poems, and a generous number in standard English from Harlem Shadows. Read Less