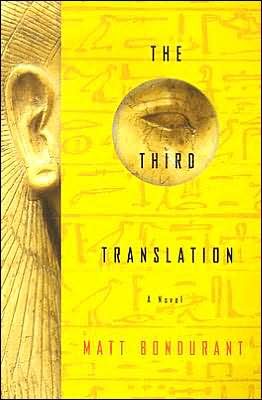 When Walter Rothschild, an American Egyptologist, is entrusted by the British Museum with the task of deciphering the real-life mystery of the Stela of Paser, an ancient funerary stone, he finds himself stepping into a world of conspiracy, cults, and danger. Read More
An ancient mystery, a hidden language, and the secrets of a bizarre Egyptian sect collide in modern-day London in this ingenious novel of seduction, conspiracy, and betrayal alter Rothschild is an American Egyptologist living in London and charged by the British Museum with the task of unlocking the ancient riddle of the Stela of Paser, one of the last remaining real-life hieroglyphic mysteries in existence today. The secrets of the stela-a centuries-old funerary stone-have evaded scholars for thousands of years due to the stela's cryptic reference to a third translation: Read Less

Goodreads reviews for The Third Translation

The Wettest County in the World: A Novel Based on a True Sto...

Lawless: A Novel Based on a True Story

The Night Swimmer: A Novel