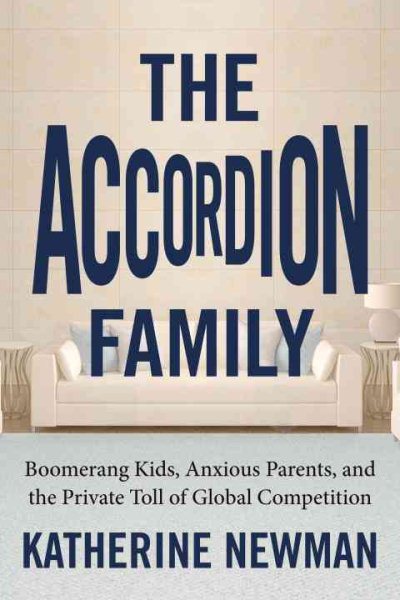 Explores the rising number of adult children who are living with their parents and the cultural and political response to this trend in a variety of countries. Read More
Why are adults in their twenties and thirties stuck in their parents’ homes in the world’s wealthiest countries?   There’s no question that globalization has drastically changed the cultural landscape across the world. The cost of living is rising, and high unemployment rates have created an untenable economic climate that has severely compromised the path to adulthood for young people in their twenties and thirties. And there’s no end in sight. Families are hunkering down, expanding the reach of their households to envelop economically vulnerable young adults. Acclaimed sociologist Katherine Newman explores the trend toward a rising number of “accordion families” composed of adult children who will be living off their parents’ retirement savings with little means of their own when the older generation is gone.   While the trend crosses the developed world, the cultural and political responses to accordion families differ dramatically. In Japan, there is a sense of horror and fear associated with “parasite singles,” whereas in Italy, the “cult of mammismo,” or mamma’s boys, is common and widely accepted, though the government is rallying against it. Meanwhile, in Spain, frustrated parents and millenials angrily blame politicians and big business for the growing number of youth forced to live at home.   Newman’s investigation, conducted in six countries, transports the reader into the homes of accordion families and uncovers fascinating links between globalization and the failure-to-launch trend. Drawing from over three hundred interviews, Newman concludes that nations with weak welfare states have the highest frequency of accordion families while the trend is virtually unknown in the Nordic countries. The United States is caught in between. But globalization is reshaping the landscape of adulthood everywhere, and the consequences are far-reaching in our private lives. In this gripping and urgent book, Newman urges Americans not to simply dismiss the boomerang generation but, rather, to strategize how we can help the younger generation make its own place in the world.   Read Less