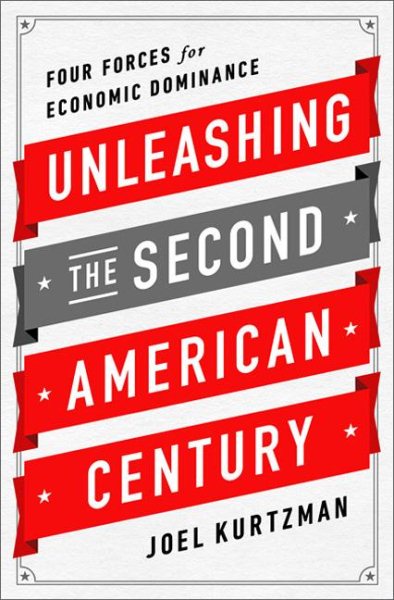 Asserts that four transformational forces--unrivaled manufacturing depth, soaring levels of creativity, massive new energy sources, and gigantic amounts of capital available--will propel the U.S. to new economic heights. Read More
Political gridlock in Washington... the lingering effects of the financial crisis... structural problems such as unemployment and the skills gap of our work force... the mediocre K-12 educational system. Are our best days behind us?Joel Kurtzman persuasively shows why all the talk about America&#39;s decline is not only baseless but dead wrong. Our best days, are, in fact, ahead of us.Four transformational forces&#151;unrivaled manufacturing depth, soaring levels of creativity, massive new energy sources, and gigantic amounts of capital waiting to be invested&#151;have been gathering steam. When combined they will provide the foundation for a much stronger economy, robust growth, and broad-based prosperity that will propel the United States to new heights. One endlessly repeated anxiety is that &#147;we don&#39;t make anything here, anymore.” The reality, though, is that the US is the world&#39;s dominant manufacturing power&#151;and growing. American companies produce 20 percent of the world&#39;s goods in the US and perhaps another 15 to 20 percent outside our country. And much of what we make is recession-proof&#151;such as software, jetliners, medical devices, pharmaceuticals, chemicals, and food.Kurtzman reveals the stories of the unsung heroes who are the creative force leading the second American century, describing the payoff of the investment in our best minds. American companies have stunning levels of talent and creativity at work in the world&#39;s fastest growing economic sectors&#151;biotech, pharmaceuticals, computer hardware and software, telecommunications, advanced manufacturing, materials science, and aeronautical and space engineering. In these fields, Americans are without peer and consistently break new ground.We are coming to the realization that America is no longer beholden to the despots of foreign energy. Thanks to advances in technology developed in the US, we now have among the world&#39;s largest energy reserves, and are richer in energy resources than Saudi Arabia and second only to Russia.These three strengths&#151;manufacturing, soaring levels of creativity, and energy independence&#151;will be magnified and synergistically combined with the unprecedented amount of capital that now lies idle. US companies of all types are hoarding cash and securities worth more than 4 trillion&#151;an amount larger than the world&#39;s fourth largest economy, Germany. When the money starts flowing and is invested, it will rapidly propel every part of the economy forward. Read Less

The Death of Money: How the Electronic Economy Has Destabliz...

Common Purpose: How Great Leaders Get Organizations to Achie...

Global Edge: Using the Opacity Index to Manage the Risks of...