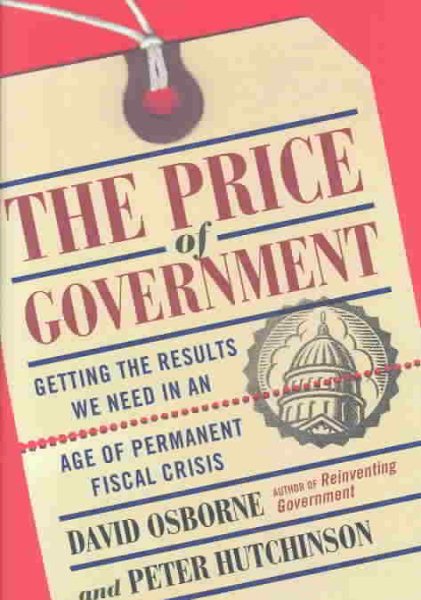 From the author of the best-selling Reinventing Government, a timely and important answer to the dilemma of constant fiscal crisis Read More
Government fiscal problems have reached crisis proportions and generated headlines all over the country. In Oregon, schools are forced to close early because money to operate them runs out. In New York City, firehouse closings cause celebrity-studded neighborhood protests. Twenty-two state governors, from both parties and all regions of the country, have proposed tax increases to make up for falling revenues, rising expenses, and falling federal support. In Washington, the federal government projects a half-trillion-dollar deficit. The fiscal crisis in government at every level is the most severe it's been since World War II.Where David Osborne's 1992 New York Times bestseller Reinventing Government was descriptive, showing readers a new model of government then emerging around the country, The Price of Government is prescriptive. It offers specific solutions, drawn from the authors' ten years of experience applying reinvention strategies, and shows how to apply them in the context of a permanent fiscal crisis. The authors describe how a budget process that starts with results, not spending programs, has been a springboard for transformation in governments at all levels. The Price of Government will interest everyone who is concerned with how our tax money is spent--and how to get the government we need to thrive and prosper. Read Less

Goodreads reviews for The Price Of Government: Getting the Results We Need in an Age of Permanent Fiscal Crisis

Home for the Holidays