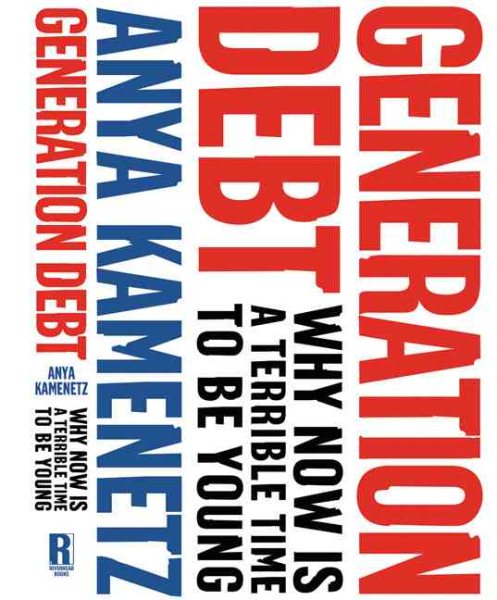 A Pulitzer Prize-nominated journalist draws on her research with experts in economics, education, the health-care industry, and other fields to identify the sources of massive debt among young adults, in an account that explores such factors as college loans, poor employee benefits, and threats to social security. 40,000 first printing. Read More
An emerging spokesperson for a new generation passionately and persuasively addresses the grim state of young people today-and tells us how we can, and must, save our future. The nature of youth is to question. So when twenty-four-year-old Anya Kamenetz started out as a journalist, she began asking hard questions about her generation for which no one seemed to have good answers. Why were college students nationwide graduating with an average of more than $20,000 in student loans? Why were her friends thousands of dollars in credit-card debt? Why did so many jobs for people under thirty-five involve a plastic name badge, last only for the short-term, and not include benefits? With record deficits and threats to Social Security, what kind of future was shaping up for the nation's kids? Kamenetz became one of the youngest ever columnists for The Village Voice, where she earned a Pulitzer Prize nomination for her reporting on the new economics of being young. In Generation Debt, she talks to experts in economics, labor markets, the health-care industry, and education, and amasses a startling array of evidence that building a secure life, let alone surviving, is harder for young people today than it was thirty years ago. Like Barbara Ehrenreich's Nickel and Dimed, Generation Debt is a compelling day-to-day look at the life experiences behind a massive economic shift. Like Naomi Klein's No Logo, it is a deeply researched, rousing manifesto that will get you thinking in new ways about American values-and about America's future. Read Less

The Art of Screen Time: How Your Family Can Balance Digital...

DIY U: Edupunks, Edupreneurs, and the Coming Transformation...

Generation Debt: How Our Future Was Sold Out for Student Loa...