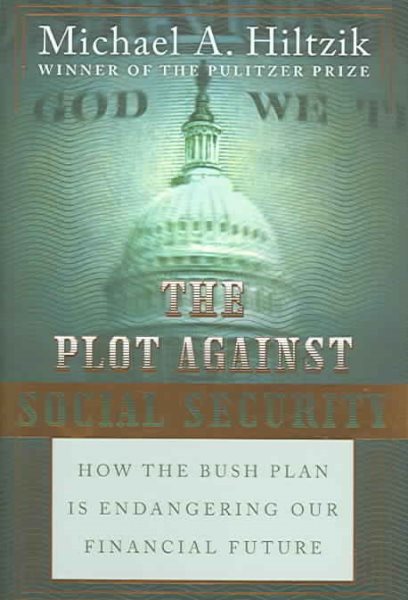 Presents an analysis of the present system, arguing that the changes advocated by President Bush are based on faulty interpretations of the program provided by lobbyists of the brokerage and insurance industries. Read More
Relentless and ominous, the drumbeat echoes across the land: Social Security is on the verge of bankruptcy. The warning has been repeated so often that it has become a dismal article of faith for the millions of Americans who pay Social Security taxes and expect to collect benefits someday. But it is flatly untrue. Social Security today is as financially strong as it has been in decades. Despite its relative good health, however, it is facing the most dangerous political challenge to its existence since its birth 70 years ago. The Plot Against Social Security explains who is really behind the efforts to "reform" this system and shows that the most frequently proposed fix -- diverting a huge portion of its assets into private investment accounts -- will damage it beyond repair, undermining retirement security for generations of Americans.Award-winning journalist Michael Hiltzik documents the privatization lobby's ties to the brokerage and insurance industries that stand to profit from the proposed changes. He debunks the myths disseminated by Social Security's enemies, repeated by rote even by its friends and now accepted as gospel by many Americans -- including claims that the retirement of baby boomers will plunge the system into bankruptcy; that the $1.7 trillion in government securities held by the Social Security trust fund are worthless pieces of paper; and that workers can earn better returns on their payroll tax contributions by investing them privately than by leaving them in the system. Finally, he offers a clear set of remedies for those few elements of Social Security that do need repair -- proposals that will shore up the most effcient social insurance program in America's history rather than destroyingit in the name of reform. Read Less

Goodreads reviews for The Plot Against Social Security: How the Bush Plan Is Endangering Our Financial Future

Colossus: Hoover Dam and the Making of the American Century

The New Deal: A Modern History