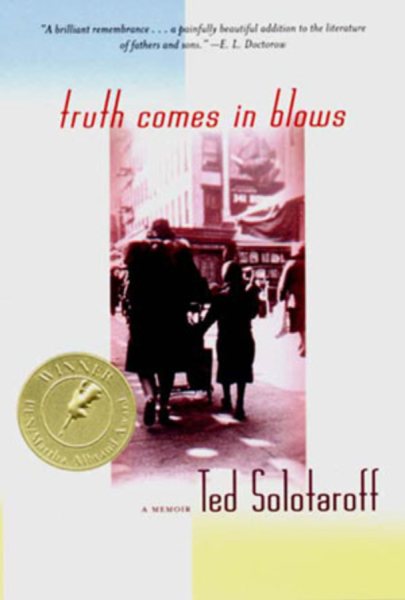 An autobiography of the literary editor describes his childhood in Elizabeth, New Jersey, his conflicted relationship with his parents, and the influence of the Depression, World War II, and his Jewish heritage Read More
Planted between Ted and a normal boyhood was Ben Solotaroff, as hard a father to placate, defy, and finally accept as can be found in the annals of the American memoir. Tough, bullying, seductive, Ben Solotaroff was a self-made man—"almost all ego and almost no conscience"—who made a success of his glass business and a wasteland of his home life. Against a crystalline view of American life in the 1930s and '40s, Truth Comes in Blows places its classic themes—the ambivalent love of a son for his victimized mother, the romance of post-immigrant Jews with middle America, sports and masculinity, the guilty imperatives of breaking away—and renews them with a candor Philip Roth praised as "not only a literary achievement but a considerable moral achievement as well." A reading group guide is bound into the paperback. Read Less

Goodreads reviews for Truth Comes in Blows: A Memoir

A Few Good Voices in My Head: Occasional Pieces on Writing,...