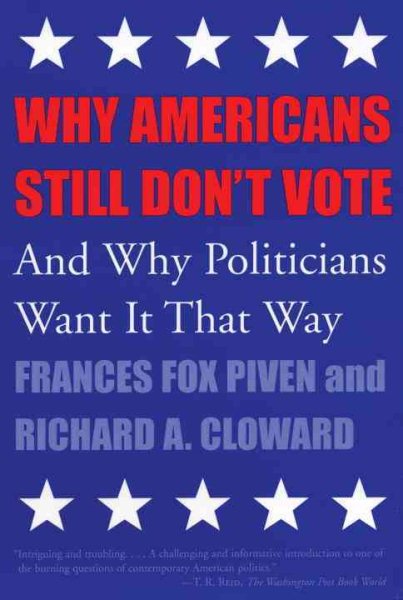 A study of twentieth-century American voter registration and elections looks at the history of U.S. elections, explains how barriers are put up to discourage the poor from voting, and discusses the possibility of reform. Read More
Americans take for granted that ours is the very model of a democracy. At the core of this belief is the assumption that the right to vote is firmly established. But in fact, the United States is the only major democratic nation in which the less well-off, the young, and minorities are substantially underrepresented in the electorate.Frances Fox Piven and Richard A. Cloward were key players in the long battle to reform voter registration laws that finally resulted in the National Voter Registration Act of 1993 (also known as the Motor Voter law). When Why Americans Don't Vote was first published in 1988, this battle was still raging, and their book was a fiery salvo. It demonstrated that the twentieth century had witnessed a concerted effort to restrict voting by immigrants and blacks through a combination of poll taxes, literacy tests, and unwieldy voter registration requirements.Why Americans Still Don't Vote brings the story up to the present. Analyzing the results of voter registration reform, and drawing compelling historical parallels, Piven and Cloward reveal why neither of the major parties has tried to appeal to the interests of the newly registered-and thus why Americans still don't vote. Read Less

Goodreads reviews for Why Americans Still Don't Vote: And Why Politicians Want It That Way (New Democracy Forum)

Poor People's Movements: Why They Succeed, How They Fail