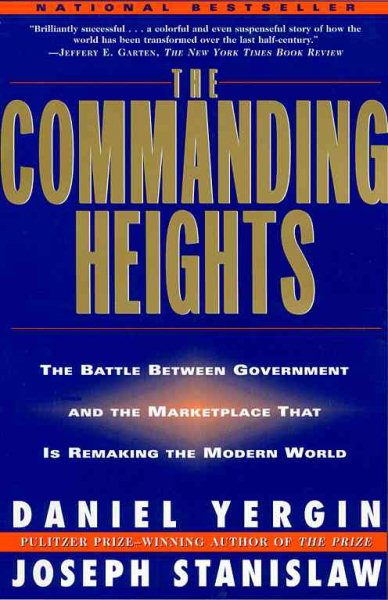 An examination of the political battle between the state and the marketplace explores the collapse of the Soviet Union and deregulation Read More
Trillions of dollars in assets and fundamental political power are changing hands as free markets wrest control from government of the "commanding heights" - the dominant businesses and industries of the world economy. Daniel Yergin and Joseph Stanislaw demonstrate that words like "privatization" and "deregulation" are inadequate to describe the enormous upheaval that is unfolding before our eyes. Along with the creation of vast new wealth, the map of the global economy is being redrawn. Indeed, the very structure of society is changing. New markets and new opportunities have brought great new risks as well. How has all this come about? Who are the major figures behind it? How does it affect our lives?The collapse of the Soviet Union, the awesome rise of China, the awakening of India, economic revival in Latin America, the march toward the European Union - all are a part of this political and economic revolution. Fiscal realities and financial markets are relentlessly propelling deregulation; achieving a new balance between government and marketplace will be the major political challenge in the coming years. Looking back, the authors describe how the old balance was overturned, and by whom. Looking forward, they explore these equations: Will the new balance prevail? Or does the free market contain the seeds of its own destruction? Will there be a backlash against any excesses of the free market? And finally, The Commanding Heights illuminates the five tests by which the success or failure of all these changes can be measured, and defines the key issues as we enter the twenty-first century.The Commanding Heights captures this revolution in ideas in accounts of the history and the politics of the postwar years and tales of the astute politicians, brilliant thinkers, and tenacious businessmen who brought these changes about. Margaret Thatcher, Ronald Reagan, Deng Xiaoping, and Bill Clinton share the stage with the "Minister of Thought" Keith Joseph, the broomaker's son Domingo Cavallo, and Friedrich von Hayek, the Austrian economist who was determined to win the twenty-year "battle of ideas." It is a complex and wide-ranging story, and the authors tell it brilliantly, with a deep understanding of human character, making critically important ideas lucid and accessible. Written with unique access to many of the key players, The Commanding Heights, like no other book, brings us an understanding of the last half of the twentieth century - and sheds a powerful light on what lies ahead in the twenty-first century. Read Less

Goodreads reviews for The Commanding Heights: the Battle Between Government & the Marketplace That Is Remaking the Modern World