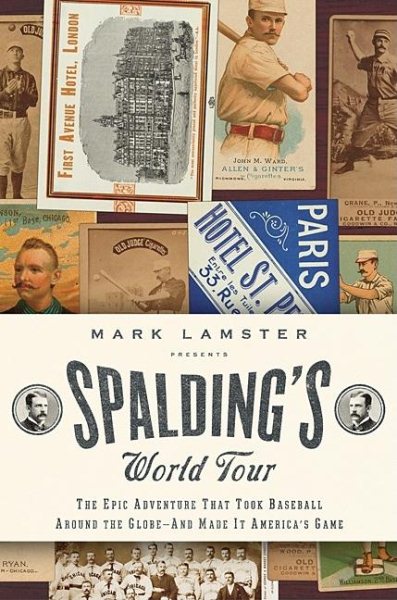 For Father's Day and the baseball season: This Gilded Age adventure of a great showman, an extraordinary voyage, and 19th century baseball could well be titled "Around the World in Eighty Games" Read More
In October of 1888, Albert Goodwill Spalding?baseball star, sporting-goods magnate, promotional genius, serial fabulist?departed Chicago on a trip that would take him and two baseball teams on a journey clear around the globe. Their mission, closely followed in the American and international press, had two (secret) goals: to fix the game in the American consciousness as the purest expression of the national spirit, and to seed markets for Spalding's products near and far. In the process, these first cultural ambassadors played before kings and queens, visited the Coliseumand the Eiffel Tower, and took pot shots with their baseballs at the great Sphinx in Egypt. This expedition to lands both exotic and familiar is chronicled with dash and wit in Mark Lamster's Spalding's World Tour, a book filled with larger-than-life characters often competing harder for love and money off the baseball diamond than for runs on it. Getting themselves into scrapes and narrowly escaping international incident all around the globe, these innocents abroad gave the world an early peek at the American century just around the corner. For anyone interested in the history of the game?or the history of brand marketing?Spalding's World Tour hits the sweet spot. Read Less

Goodreads reviews for Spalding's World Tour: The Epic Adventure that Took Baseball Around the Globe - And Made It America's Game

A whiff of grapeshot

Legends of the Outer Banks and Tar Heel Tidewater