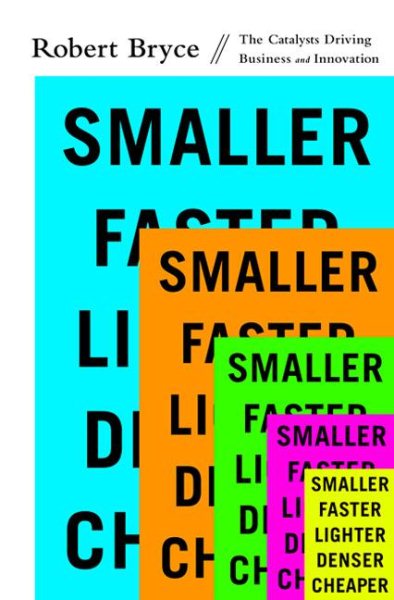 Argues against the modern movement to de-industrialize, re-localize and reduce both consumption and development in order to preserve the planet and instead advocates for advancing innovations and future technologies to improve the world with smaller, faster solutions. Read More
"In the face of today's environmental and economic challenges, doomsayers preach that the only way to stave off disaster is for humans to reverse course: to de-industrialize, re-localize, ban the use of modern energy sources and forswear prosperity. But in this provocative and optimistic rebuke to the catastrophists, Robert Bryce shows how innovation and the inexorable human desire to make things Smaller Faster Lighter Denser Cheaper is providing consumers with Cheaper and more abundant energy, Faster computing, Lighter vehicles, and a myriad of other goods. That same desire is fostering unprecedented prosperity, greater liberty, and yes, better environmental protection. Utilizing on-the-ground reporting from Ottawa to Panama City and Pittsburgh to Bakersfield, Bryce shows how we have, for centuries, been pushing for Smaller Faster solutions to our problems. From the vacuum tube, mass-produced fertilizer, and the printing press to mobile phones, nanotech, and advanced drill rigs, Bryce breezily demonstrates how cutting-edge companies and breakthrough technologies have created a world in which people are living longer, freer, healthier, lives than at any time in human history. In an entertaining narrative enhanced with sharp graphics and numerous photographs, he shows that the push toward Smaller Faster Lighter Denser Cheaper is happening in multiple sectors. He profiles innovative individuals and companies, from well-known ones like Ford and Intel to upstarts like Aquion Energy and Khan Academy. And hezeroes in on the energy industry, separating fact from sentiment. Wind and biofuels may be the political darlings of the moment, but Bryce proves that the future belongs to the high-power-density sources that can provide the enormous quantities of energythe world demands. Smaller Faster Lighter Denser Cheaper demonstrates that the tools we need to save the planet aren't to be found in the technologies or lifestyles of the past. Nor must we sacrifice prosperity and human progress to ensure our survival.The catastrophists have been wrong since the days of Thomas Malthus. It's time to ignore the fearmongers. It's time to embrace the innovators and businesses all over the world who are making things Smaller Faster Lighter Denser Cheaper because, well, that's what we humans do"-- Read Less

Cronies: Oil, The Bushes, And The Rise Of Texas, America's S...