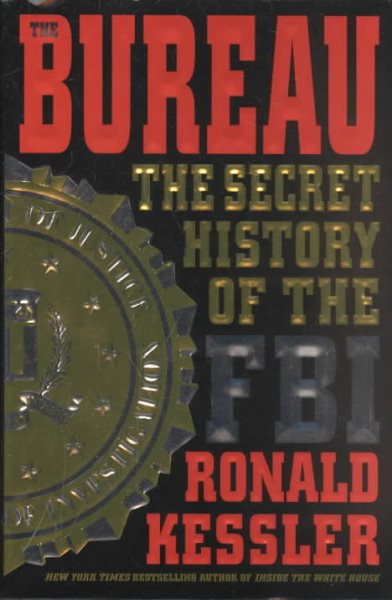 The former Washington Post and Wall Street Journal investigative reporter uses exclusive interviews to present a history of the FBI from its beginning in 1908 to its present responses to the attacks of September 11th and the anthrax mailings. Read More
A former Washington Post and Wall Street Journal investigative reporter, and the New York Times bestselling author of Inside the White House, Ronald Kessler presents the definitive history of the Federal Bureau of Investigation. Based on exclusive interviews, including the first with Robert Mueller since his nomination as director, The Bureau reveals startling new information about the bureau-from J. Edgar Hoover's blackmailing of Congress to the investigation of the September 11 attacks.With the FBI at the epicenter of the war on terrorism, no institution is as critically important to America's security. No American institution is as controversial. And, after the White House, Congress, and the Supreme Court, no institution is as powerful. Yet until now, no book has presented the full story of the FBI from its beginnings in 1908 to the present.Kessler focuses on the agents who have made its cases and the directors who have run the bureau, from Hoover through Louis Freeh and Robert Mueller. In doing so, he probes the relationship between the FBI and American presidents, and the tension that exists between a free society and what amounts to a national police force.Based on exclusive interviews-including the first interview with Mueller since his nomination The Bureau reveals for the first time the dramatic inside story of the FBI's response to the attacks of September 11, including its investigation of the anthrax mailings. The book answers questions about the bureau's role and performance: Why did the FBI know nothing useful about al-Qaeda before the attacks? What is really behind the FBI's more aggressive investigative approaches that have raised civil liberties concerns? What does the FBI think of improvements in airline security? How safe does the FBI think America really is?Only Ronald Kessler could have obtained the access necessary to answer these questions. An award-winning investigative reporter, Kessler is the author of The FBI: Inside the World's Most Powerful Law Enforcement Agency, which led to the dismissal of William S. Sessions as director. 132From DNA analysis to criminal profiling, from confirmation of Supreme Court justices to investigations of plane crashes and spies, the FBI is involved in almost every aspect of American life. Painted against the canvas of America's development in the past hundred years, The Bureau tells the richly detailed story of a uniquely powerful institution, its profound impact on American society, and how it has changed since September 11. Read Less

Goodreads reviews for The Bureau: The Secret History of the FBI

The Sins of the Father: Joseph P. Kennedy and the Dynasty he...

The Season: Inside Palm Beach and America's Richest Society

The Secrets of the FBI