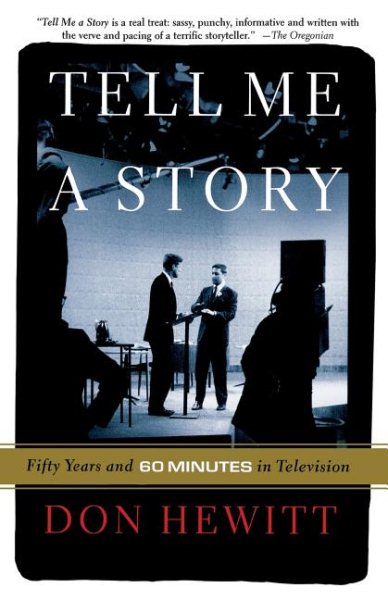 A towering figure of television news recounts his adventures in broadcast journalism, from TV's earliest days through the controversies and challenges that face the news business today. Read More
In more than a half century with CBS News, Don Hewitt has been responsible for many of the greatest moments in television history, including the first broadcasts of political conventions in 1948; the first Kennedy-Nixon debate in 1960; and, most spectacularly, for the past 34 years, 60 Minutes, for which he has been the creator, executive producer, and driving force of the news program that has redefined television journalism. In Tell Me a Story, Hewitt presents his own remarkable life story in his own words, from his time as a reporter for Stars & Stripes during the Second World War, to the heady exhilaration of the early days of television, to the triumphs and controversies of 60 Minutes. Hewitt has been at the center of events, covering some of the leading cultural and political figures of our century, and working with an all-star roster of journalists. Hewitt also speaks bluntly, with affection and humor, about the promise and the shortcomings of television news, and offers surprising perspectives on its continued power and potential as we move into a new media environment. The key to his success, as Hewitt is fond of saying, is "I may not know a lot, but I think I know how to tell a story." Never has his storytelling talent been on better display than in the pages of this extraordinary book. Read Less

Goodreads reviews for Tell Me a Story: Fifty Years and 60 Minutes in Television

Tell Me a Story: Fifty Years and 60 Minutes in Television