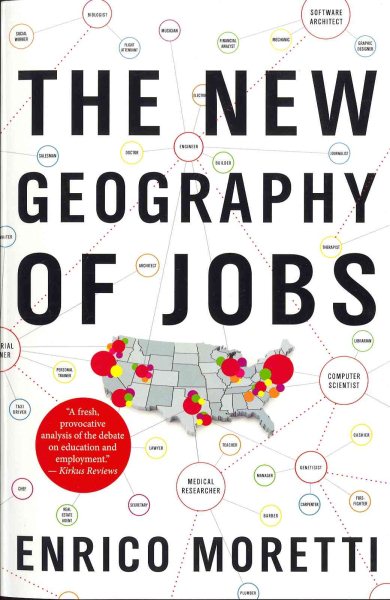 Makes correlations between success and geography, explaining how such rising centers of innovation as San Francisco and Austin are likely to offer influential opportunities and shape the national and global economies. Read More
&apos;A timely and smart discussion of how different cities and regions have made a changing economy work for them &apos; and how policymakers can learn from that to lift the circumstances of working Americans everywhere.&apos;&apos;Barack Obama We&apos;re used to thinking of the United States in opposing terms: red versus blue, haves versus have-nots. But today there are three Americas. At one extreme are the brain hubs&apos;cities like San Francisco, Boston, and Durham&apos;with workers who are among the most productive, creative, and best paid on the planet. At the other extreme are former manufacturing capitals, which are rapidly losing jobs and residents. The rest of America could go either way. For the past thirty years, the three Americas have been growing apart at an accelerating rate. This divergence is one the most important developments in the history of the United States and is reshaping the very fabric of our society, affecting all aspects of our lives, from health and education to family stability and political engagement. But the winners and losers aren&apos;t necessarily who you&apos;d expect. Enrico Moretti&apos;s groundbreaking research shows that you don&apos;t have to be a scientist or an engineer to thrive in one of the brain hubs. Carpenters, taxi-drivers, teachers, nurses, and other local service jobs are created at a ratio of five-to-one in the brain hubs, raising salaries and standard of living for all. Dealing with this split&apos;supporting growth in the hubs while arresting the decline elsewhere&apos;is the challenge of the century, and The New Geography of Jobs lights the way.   Read Less

Goodreads reviews for The New Geography Of Jobs

The New Geography of Jobs

Where Good Ideas Come From: The Natural History of Innovatio...