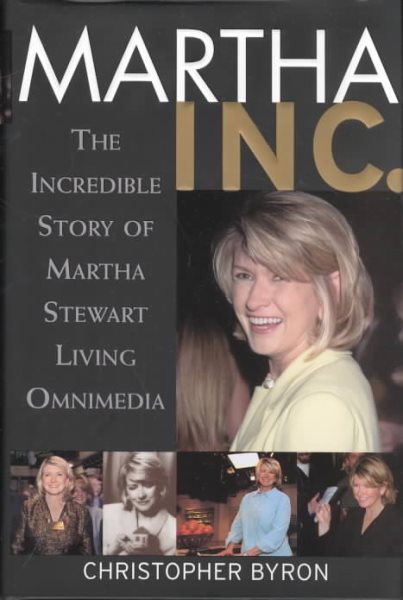 Investigates Martha Stewart's empire to uncover evidence that her difficult childhood and years on Wall Street contributed to her later stellar success in the magazine business. Read More
Martha Stewart has generated an enormous following by establishing herself as the leading authority for all things domestic and in the process created a multimillion-dollar enterprise and a personal net worth of nearly $2 billion. As one of the most successful self-made female business owners in American history, Martha Stewart is a topic of interest for fans, business professionals and would-be entrepreneurs alike.Martha Inc. tells the compelling story of how this complex woman created an empire on domesticity and examines her business inside and out. Through an engaging narrative by popular columnist Christopher Byron, this book chronicles how the business was built, what it took to take it public, and the personal and professional transformation Martha has undergone to make it all work. To get a true portrait of the woman whose work ethic is her personal life, Byron delves into the underreported facets of Martha's past, such as the effects her challenging childhood and years on Wall Street have had on her uncompromising business acumen. From Martha Stewart Living magazine and marthastewart.com to a K-Mart line of houseware products, a line of house paints, and a television show, this book details how a former caterer from Connecticut has created a media and merchandising empire, pulling off what large media corporations with vast resources struggle to accomplish.Martha Stewart has sold America on good taste and now readers can learn exactly how she did it and what drives her to keep conquering new vistas. A corporate biography as well as a success story worthy of Horatio Alger, Martha Inc. also delves into how a cult of personality is created and how Martha Stewart capitalized on the zeitgeist that characterized the last half of the twentieth century. This book is a must read for anyone who has been touched by Martha's marketing savvy or who dreams of making it big. Read Less

I Spy: A Book of Picture Riddles