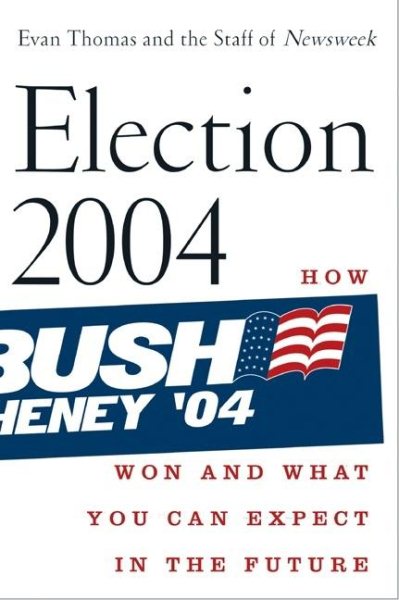 An extraordinary behind-the-scenes look at the 2004 Bush presidential victory reported by NEWSWEEK's premier political reporters, including bestselling biographer Evan Thomas. Read More
A full year before the presidential election, four Newsweek reporters are detached from the magazine to work fulltime on getting inside the campaigns of the Republican and Democratic candidates. Because Newsweek promises not to reveal any information until after the votes are cast, the reporters receive highly unusual access. They travel with the candidates, live at their headquarters, befriend their staffs. They blend into the background, where they watch and listen. Evan Thomas has been the writer for this project for the last three elections, and each time, he has brilliantly woven together an award-winning narrative of the campaign,based on the reporting of the Newsweek team. The goal is a rich narrative, a telling, human, and personal story of the extraordinary ordeal of running for the presidency. The characters are the candidates, their families, and their top advisers. They battle uncertainty, exhaustion, a hostile media, and each other in a high-stakes contest that can produce only one winner. The 2004 election promised to be drama of a high order, a close, tense, bitter struggle in a deeply divided country caught in a strange and hard war. Newsweek's reporters were there at the critical moments, recording the scenes that decided the outcome. Post election, the Newsweek team will now produce an expanded version of the stories that appeared in the magazine and Thomas will write an essay on the new administration, its key players and its prospects, the tone and direction it is expected to set. The book that emerges will be a first draft of history—not rough—but knowing and deeply reported. Read Less

Goodreads reviews for Election 2004: How Bush Won and What You Can Expect in the Future