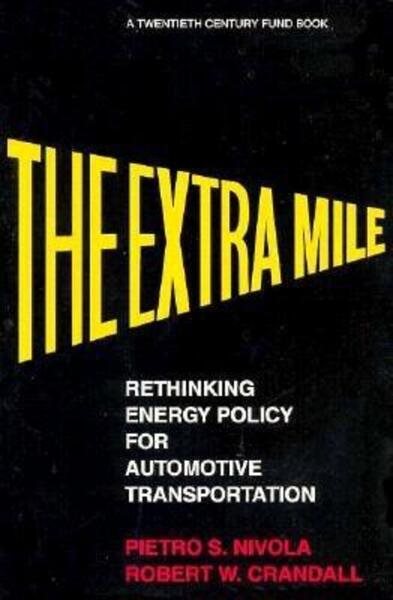 In the United States, proposals for gasoline tax hikes have consistently met with broad-base... Read More
In the United States, proposals for gasoline tax hikes have consistently met with broad-based congressional opposition. Although such taxes are a common and effective method of conserving energy in other industrialized nations, U.S. policy has traditionally relied on regulatory programs rather than fuel taxes to promote energy efficiency in automotive transportation. This book examines both the political causes and the economic effects of this idiosyncratic policy preference.Moderating the consumption and importation of oil has been an explicit goal of the United States over the past twenty years. Pietro S. Nivola and Robert W. Crandall argue that a higher levy on gasoline would be a more efficient way of achieving this goal than current automotive fuel economy standards. In fact, they find that an additional excise of less than twenty-five cents per gallon over the past dozen years would have conserved more oil than has the existing policy of administering gas mileage requirements for new passenger vehicles. And such a tax, they maintain, would not be as detrimental to the economy as opponents fear, nor as regressive as they claim.Why, then, is there such a strong national resistance to a fuel tax in the United States? And why is there less resistance in other countries? The authors examine the development of motor-fuel excises in Great Britain, France, Germany, Japan, and Canada, and explain the historical and political factors that have led to different national policy orientations.Turning their attention back to the United States, Nivola and Crandall show how regulatory measures have fallen short of their goal and why political barriers to bolder taxation of gasoline remain formidable. They conclude by offering suggestions for new directions in U.S. energy policy at the federal, state, and local level. Read Less

First Thing We Do, Let's Deregulate All the Lawyers

Competition and Chaos: U.S. Telecommunications since the 199...

The Scientific Basis of Health and Safety Regulation