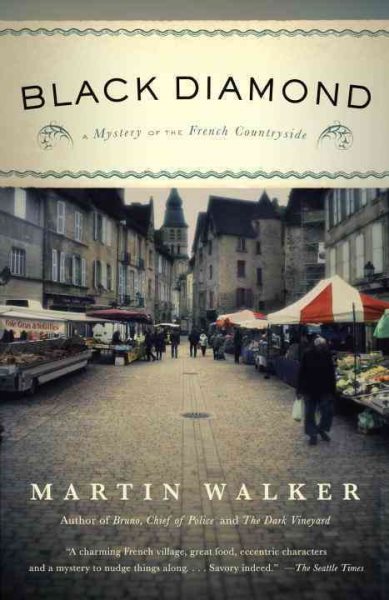 In the wake of attacks on local Asian vendors and an increase in black-market ingredients that threaten the Dordogne's lucrative truffle trade, Chief of Police Bruno finds the case taking a personal turn when one of his hunting partners, a former high-profile intelligence agent, is murdered. Read More
A noted truffle expert is murdered in this installment of the delightful, internationally acclaimed series featuring Chief of Police Bruno. Filled with an abundance of food and wine (including, bien sûr, many, many truffles), Black Diamond is a deliciously entertaining concoction that delivers all the complexity and delights of the Dordogne itself."A charming French village, great food, eccentric characters and a mystery to nudge things along.... Savory indeed" —The Seattle TimesSomething dangerous is afoot in St. Denis. In the space of a few weeks, the normally sleepy village sees attacks on Vietnamese vendors, arson at a local Asian restaurant, subpar truffles from China smuggled into outgoing shipments at a nearby market—all of it threatening the Dordogne’s truffle trade, worth millions of dollars each year, and all of it spelling trouble for Benoît “Bruno” Courrèges, master chef, devoted oenophile, and, most important, beloved chief of police. When one of his hunting partners, a noted truffle expert, is murdered, Bruno’s investigation into the murky events unfolding around St. Denis becomes infinitely more complicated. His friend wasn’t just a connoisseur of French delicacies, he was a former high-profile intelligence agent—and someone wanted him dead.As the strange crimes continue, Bruno’s detective work takes him from sunlit markets to dim cafés, from luxurious feasts to tense negotiations—from all of the paradisial pleasures of the region to its shadowy underworld—and reunites him with a lost love, an ambitious policewoman also assigned to the case.  Read Less

Goodreads reviews for Black Diamond: A Mystery of the French Countryside

The Dark Vineyard: A Novel of the French Countryside

The Resistance Man: A Mystery of the French Countryside