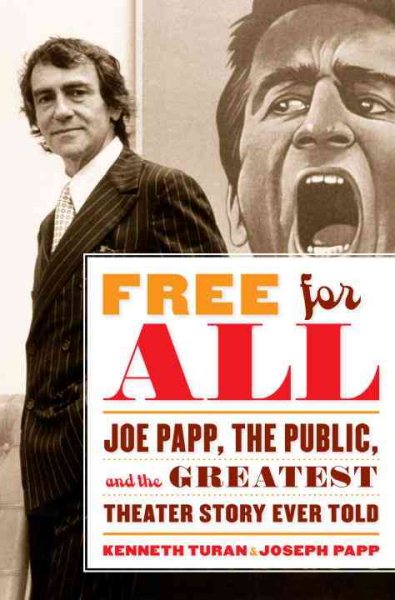 "Los Angeles Times" film critic Kenneth Turan takes you behind the scenes at the Public Theater and tells the amazing story of how Joe Papp made American theatrical and cultural history. Read More
Free for All is an oral history of the New York Shakespeare Festival/Public Theater - an institution that under the leadership of Joseph Papp became the leading source of revolutionary and enduring American theater. To tell this story, Kenneth Turan interviewed some 160 luminaries and weaves their voices into a rich tale of creativity, conflict, and achievement. We see how a dogged, idealistic, tough-as-nails theatrical visionary took a radically democratic vision of first-rate productions of Shakespeare's plays for an urban audience - for free, a policy that brought Joe Papp into an epic conflict with Robert Moses - and not only succeeded but ended up making theatrical history. Here, in all their backstage drama, are the accounts of how many landmark productions came into the world.At the center of this account of artistic daring and excellence the larger-than-life figure of Joseph Papp reigns supreme: the difficult poverty of his childhood, the youthful radicalism it led to, his huge battles and clashes of wills and temperament, and, most of all, the achievements against long odds - told with candor and often painful honesty. Read Less

Goodreads reviews for Free for All: Joe Papp, The Public, and the Greatest Theater Story Ever Told

Call Me Anna: The Autobiography of Patty Duke

Not to be Missed: Fifty-four Favorites from a Lifetime of Fi...

Never Coming To A Theater Near You