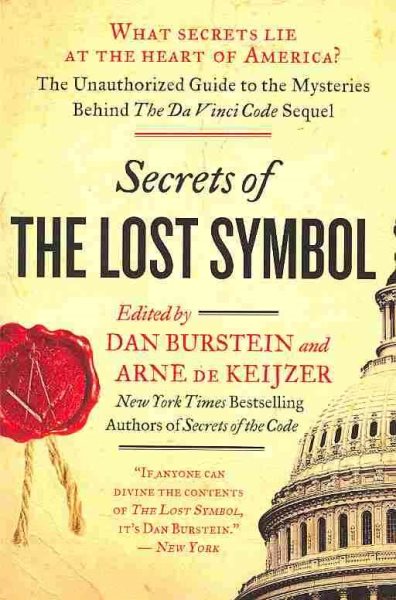 'If anyone can divine the contents of The Lost Symbol, it's Dan Burstein.' &apos... Read More
&apos;If anyone can divine the contents of The Lost Symbol, it&apos;s Dan Burstein.&apos; &apos;New York magazineWith Secrets of the Lost Symbol, co-authors Dan Burstein and Arne de Keijzer delve into the real history, science, and hidden meanings behind Dan Brown&apos;s latest blockbuster novel, The Lost Symbol. As they have done previously with their extraordinary New York Times bestsellers Secrets of the Code and Secrets of Angels & Demons, Burstein and de Keijzer explore the themes, conspiracies, mythologies, codes, encrypted signs, and alternate histories&apos;from the birth of Knights Templar to the present day&apos;popularized by the acclaimed creator of The Da Vinci Code, giving them fresh and fascinating relevance while separating truth from fantasy. Read Less

Goodreads reviews for Secrets of The Lost Symbol: The Unauthorized Guide to the Mysteries Behind The Da Vinci Code Sequel

Yen!: Japan's New Financial Empire and Its Threat to Americ...

Big Dragon: China's Future, What It Means For Business, the...