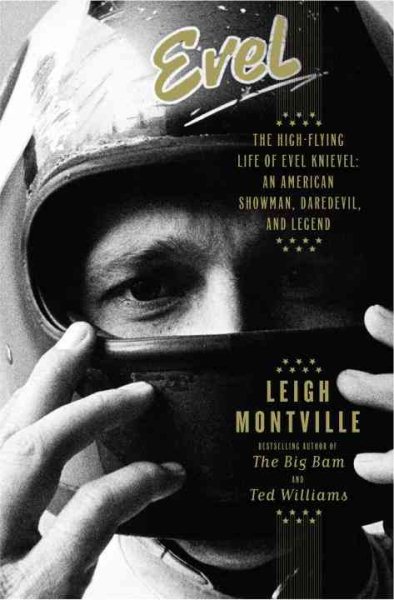 A portrait of the motorcycle icon goes behind his famous persona to reveal the complexities and controversial aspects of his private world, offering insight into his contradictory relationships and the experiences and personal demons that compelled him to repeatedly risk his life. 100,000 first printing. Read More
From New York Times bestselling author Leigh Montville, this riveting and definitive new biography pulls back the red, white, and blue cape on a cultural icon—and reveals the unknown, complex, and controversial man known to millions around the world as Evel Knievel. Evel Knievel was a high-flying daredevil, the father of extreme sports, the personification of excitement and dan­ger and showmanship . . . and in the 1970s Knievel repre­sented a unique slice of American culture and patriotism. His jump over the fountains at Caesar’s Palace led to a crash unlike anything ever seen on television, and his attempt to rocket over Snake River Canyon in Idaho was something only P. T. Barnum could have orchestrated. The dazzling motorcycles and red-white-and-blue outfits became an integral part of an American decade. Knievel looked like Elvis . . . but on any given Saturday afternoon millions tuned in to the small screen to see this real-life action hero tempt death. But behind the flash and the frenzy, who was the man? Bestselling author Leigh Montville masterfully explores the life of the complicated man from the small town of Butte, Montana. He delves into Knievel’s amazing place in pop culture, as well as his notorious dark side—and his complex and often contradictory relationships with his image, the media, his own family, and his many demons. Evel Knievel’s story is an all-American saga, and one that is largely untold. Leigh Montville once again delivers a definitive biography of a one-of-a-kind sports legend. Read Less

The Big Bam: The Life and Times of Babe Ruth

The Mysterious Montague: A True Tale of Hollywood, Golf, and...

Ted Williams: The Biography of an American Hero