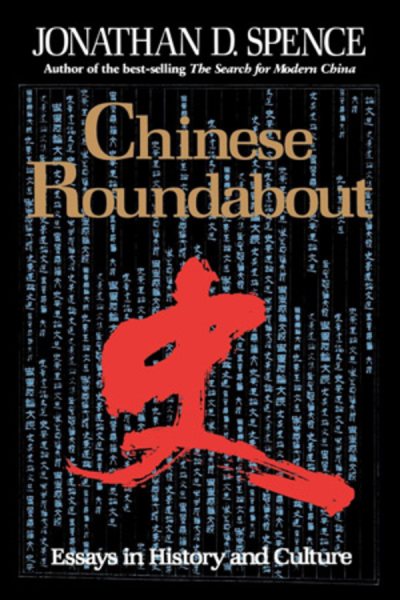 “If one has the art, then a piece of celery or salted cabbage can be made into a marvelous delicacy; whereas if one has not the art, not all the greatest delicacies and rarities of land, sea, or sky are of any avail.” —a Beijing cook, nineteenth century from Chinese Roundabout Read More
The spirit of adventure is at the heart of Jonathan Spence's widely acclaimed scholarship on the modern history of China. This vitality, fleshed out with deep research and attired in elegant style, has drawn countless readers to subjects otherwise approachable only by experts. Through eight books, from the story of the early eighteenth century Manchu bondservant Ts'ao Yin to his magisterial history, The Search for Modern China, Spence has made the excitement of intellectual discovery palpable for us all. In the course of his fruitful career Spence has written many shorter pieces as well, and the best of these are collected for the first time in Chinese Roundabout. Here the reader will meet Arcadio Huang, the Chinese linguist and Christian convert who moves from south China to Enlightenment Paris, marries a French woman, and in conversations with Montesquieu becomes the likely source for the Persian Letters. The poignant story of Huang's hard-won success and final defeat by poverty and disease illustrates the perils of crossing cultures. Spence's delight in intellectual risk animates his Shakespearean approach to the life of the great Qing emperor in "The Seven Ages of K'ang-hsi." Spence's great learning informs an authoritative essay on China's tragic experience with opium. Following the social process of addiction from the cultivation of poppies and the processing of the drug through its introduction by the British into China, its widespread distribution and consumption by Chinese, and the public struggle to suppress opium use, Spence explores issues of historical and contemporary interest. In an equally substantial piece he focuses on the cultural dimensions of food in Qing China, illuminating the marginal diet of a peasantry constantly threatened by famine as well as the grand banquets of the literati and the imperial household. In the work of 25 years, Spence has established himself as a brilliant interpreter of modern Chinese history. His books—among them the recent national bestseller The Search for Modern China—exhibit uncommon imagination, unobtrusive learning, verve, and elegance. These same qualities animate the essays gathered here. Read Less

Goodreads reviews for Chinese Roundabout: Essays in History and Culture

The Death of Woman Wang

The Gate of Heavenly Peace: The Chinese and Their Revolution

The Memory Palace of Matteo Ricci