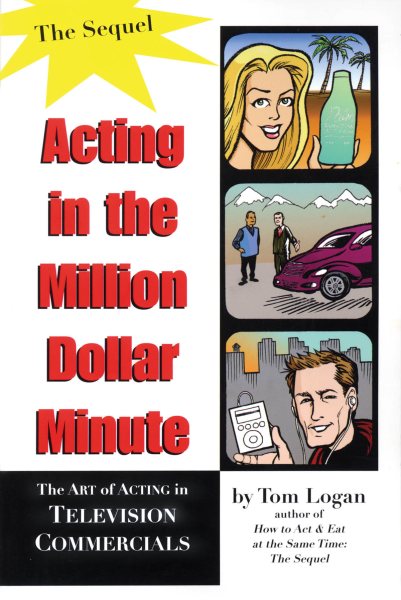 In this book Tom Logan focuses specifically on acting in commercials. The advice he offers - compiled from thousands of comments from hundreds of casting directors, directors, and producers, and pared down into one concise book - gives the actor a complete sense of what industry professionals on the other side of the camera expect from a commercial actor during auditions. Read More
(Limelight). While television commercials often elicit groans from the viewer, they mean work for actors and can be the bread-and-butter backbone of an actor's career, providing a safety net of income while he or she climbs the ladder to greater success. And for those actors who achieve face-to-product recognition, commercial work can provide handsome residuals for years to come. While many books on the market include some information on commercial work, Acting in the Million Dollar Minute deals exclusively with the art and business of acting in commercials. Here the "art" is narrow: script terminology and procedure, commercial dialogue, camera staging, working the product, sample commercial scripts, and detailed analysis of how a commercial is actually shot; while the "business" side, reflecting the general industry, broadens to include training, photos, the resume, unions, actor-agency contracts, the interview, the screen test, callbacks, pay and working conditions, and a complete list of SAG and AFTRA offices. In this revised and updated edition, this book provides direction on how to: Decipher the meaning behind the commercial script; Begin and end every commercial performance; Get the auditioners' attention immediately when the camera begins rolling; Compel the auditioners, with the sheer force of your performance, to actually watch your playback tape; Take the camera from another actor (i.e. upstaging); Give the director a performance that makes his or her job easier in the editing room. Read Less

Goodreads reviews for Acting in the Million Dollar Minute: The Art and Business of Performing in TV Commercials - Expanded Edition

How to Act and Eat at the Same Time: The Business of Landing...