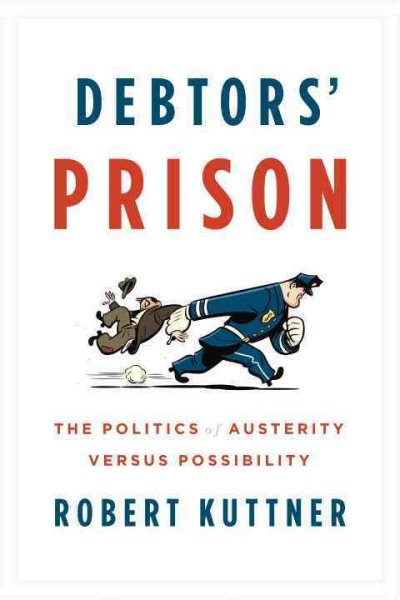 Combining economics with historical examples of effective debt relief and punitive debt enforcement, presents evidence that austerity and universal belt-tightening would be detrimental to the economic recovery of the U.S. Read More
One of our foremost economic thinkers challenges a cherished tenet of today’s financial orthodoxy: that spending less, refusing to forgive debt, and shrinking government—“austerity”—is the solution to a persisting economic crisis like ours or Europe’s, now in its fifth year.Since the collapse of September 2008, the conversation about economic recovery has centered on the question of debt: whether we have too much of it, whose debt to forgive, and how to cut the deficit. These questions dominated the sound bites of the 2012 U.S. presidential election, the fiscal-cliff debates, and the perverse policies of the European Union.Robert Kuttner makes the most powerful argument to date that these are the wrong questions and that austerity is the wrong answer. Blending economics with historical contrasts of effective debt relief and punitive debt enforcement, he makes clear that universal belt-tightening, as a prescription for recession, defies economic logic. And while the public debt gets most of the attention, it is private debts that crashed the economy and are sandbagging the recovery—mortgages, student loans, consumer borrowing to make up for lagging wages, speculative shortfalls incurred by banks. As Kuttner observes, corporations get to use bankruptcy to walk away from debts. Homeowners and small nations don’t. Thus, we need more public borrowing and investment to revive a depressed economy, and more forgiveness and reform of the overhang of past debts. In making his case, Kuttner uncovers the double standards in the politics of debt, fromRobinson Crusoe author Daniel Defoe’s campaign for debt forgiveness in the seventeenth century to the two world wars and Bretton Woods. Just as debtors’ prisons once prevented individuals from surmounting their debts and resuming productive life, austerity measures shackle, rather than restore, economic growth—as the weight of past debt crushes the economy’s future potential. Above all, Kuttner shows how austerity serves only the interest of creditors—the very bankers and financial elites whose actions precipitated the collapse. Lucid, authoritative, provocative—a book that will shape the economic conversation and the search for new solutions. Read Less

Goodreads reviews for Debtors' Prison: The Politics of Austerity Versus Possibility

Everything for Sale: The Virtues and Limits of Markets

The Squandering of America: How the Failure of Our Politics...